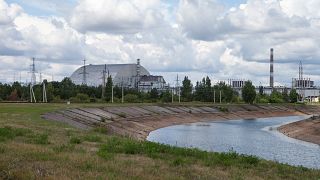 The view over the cooling pond of the Chernobyl nuclear power plant and reactor No. 4, covered with the protective shield.   -   Copyright  Natalia Liubchenkova/Euronews
By Marthe de Ferrer  •  Updated: 25/02/2022

After Russian troops captured Chernobyl yesterday, scientists and environmental experts have warned about the potential ecological disaster that could unfold.

Ukrainian Prime Minister Denys Shmyhal said in a statement that the former nuclear power plant, as well as the surrounding 30-kilometre Exclusion Zone, are now under armed Russian control.

Earlier in the day, Ukraine’s president, Volodymyr Zelenskyy, said Ukrainian “defenders are giving their lives so that the tragedy of 1986 will not be repeated.”

Chernobyl was the site of the worst nuclear disaster in history, after a reactor exploded and spread radioactive waste across Europe in April 1986.

In recent years the site has become a popular tourism spot, as well as an unexpected environmental success story as various species began to flourish in the region.

Today, radiation readings from Chernobyl are being reported as above average sparking global concern.

Why are environmental scientists concerned about Chernobyl being captured?

Data from the Exclusion Zone is currently showing increased levels of gamma radiation.

The State Nuclear Regulatory Inspectorate of Ukraine said “control levels of gamma radiation dose rate have been exceeded at a significant number of observation points.”

However, they added, “it is currently impossible to establish the reasons for the change in the radiation background in the exclusion zone because of the occupation and military fight in this territory.”

Data from the automated radiation monitoring system of the exclusion zone, which is available online, indicate that the control levels of gamma radiation dose rate (red dots) have been exceeded at a significant number of observation points. pic.twitter.com/G4WEGgkMcT

Other experts have suggested that a spike in radiation is likely due to the soil being disturbed, rather than a reactor breach.

“Resuspension of dust and soil is likely one of the factors of higher levels of radiation,” said Wim Zwijnenburg, the Humanitarian Disarmament Project Leader for the Dutch peace organisation PAX.

The International Atomic Energy Agency (IAEA) has said it is following the situation in Ukraine “with grave concern”, but noted that there has been no reported destruction at the Chernobyl nuclear plant site.

“It is of vital importance that the safe and secure operations of the nuclear facilities in [the Chernobyl Exclusion Zone] should not be affected or disrupted in any way,” said IAEA’s Director General Rafael Mariano Grossi.

This afternoon the IAEA released an updated statement saying the raised radiation levels are not a cause for concern right now.

"Regarding reports earlier today of higher radiation measurements at the Chornobyl site, Ukraine’s regulatory authority said that they may have been caused by heavy military vehicles stirring up soil still contaminated from the 1986 accident," reads the IAEA's statement.

"The IAEA assesses that the readings reported by the regulator – of up to 9.46 microSieverts per hour – are low and remain within the operational range measured in the Exclusion Zone since it was established, and therefore do not pose any danger to the public."

Currently, there is a shelter over the plant which was constructed to prevent the release of hundreds of tonnes of radioactive matter.

This was upgraded in 2016 and the structure is reportedly able to “withstand a tornado” and stand for at least 100 years, according to the European Bank for Reconstruction and Development.

The risk in the zone is the nuclear waste stored in the area. These waste sites contain radioactive material and there are some hotspots inside the zone too.

Epidemiology and biostatistics professor Lydia Zablotska told the Washington Post that staff working in Chernobyl were aware of these sites, but incoming troops won’t know the layout or where to avoid in the zone.

This could potentially lead to tanks and other vehicles being contaminated by radiation, which is then spread further.

“What really worries me is there’s staff there, there are scientists working there,” said Zablotska.

“How are they doing? They dedicated their lives to protecting the world from the most contaminated area on Earth.”

Why is the Chernobyl Exclusion Zone so important for ecologists?

Euronews Green spoke with Professor Nick Beresford, a radioecologist at the UK Centre for Ecology and Hydrology (UKCEH). He explained the environmental history of the region, and what scientists' concerns are now that the zone has been captured:

_“The absence of human activity has seen increased numbers of many species including Eurasian lynx, wolves, brown bear and raptors. It is the only large wilderness area where all extant European large carnivores interact with a range of large herbivores and mesopredators. _

"The area offers us the opportunity to study a natural rewilding experiment which could give key knowledge as mankind tries to address global climate change and the biodiversity crises.

“We know very little of what is happening in the Chernobyl Exclusion Zone currently and it is difficult to predict impacts on the diverse range of wildlife now living there.

“The Chernobyl Exclusion Zone has some of the most radiologically contaminated ecosystems on earth and has become an important natural laboratory allowing us to study the impacts of radiation on wildlife. Studies are no longer taking place there, and we do not know when these can be resumed. This impacts our ability to provide the science to underpin the regulation of the uses of radiation (from medicine to nuclear power).

“UKCEH staff have made contact with their key Ukrainian collaborators, some of whom they have worked with for approaching 30 years, and are thankful that they and their families are currently safe.”

Beyond Chernobyl, there are concerns about the lasting environmental damage from the Russian invasion.

Ukraine has 15 operational nuclear reactors, which accounts for more than half the country’s electricity usage. Only France and Russia have more reactors in Europe.

The country is also home to many chemical factories, disused mines and other power plants - particularly in the east. Experts fear Russian attacks in the area could majorly impact the environment in the long term.

“The east of Ukraine is heavily industrial, full of chemical factories, run-down mines and thermal power plants. The potential for an environmental catastrophe to add to the horrific humanitarian crisis is enormous,” explains Richard Pearshouse, Amnesty International’s head of crisis and environment.

National security consultant Craig Hooper warned last year that full-scale war in Ukraine could lead to an “environmental cleanup [that] would absorb Europe for years.”