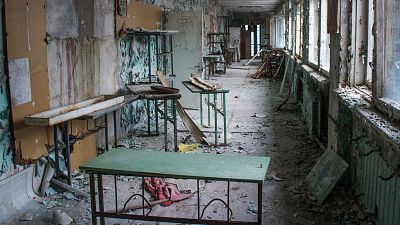 Ukraine marks the 35th anniversary of the Chernobyl disaster, the biggest one in the history of nuclear energy.

The consequences of it are still impossible to evaluate – but we do know that a huge radioactive cloud gradually reached almost every corner on Earth.

The first responders worked on the station with the minimum of protective clothing, leading to around 30 of them dying from radiation poisoning in days. In the end, over half a million people took part in clean-up efforts.

Oleksiy Breus was among them. Initially he was an operator of the 4th block control panel, on duty on the day of the disaster. He later joined the first responders.

“Chernobyl is a big lesson", he told Euronews. "We learned a lot technologically, and also in overcoming the results, and how to deal with it, how to use it. Tourism is one of the options on how to use Chernobyl. Tourism here is not entertainment. Even when the tourists come here for entertainment, they return in a totally different mood. Visiting the exclusion zone gives a feeling that you are now connected to this event of the Biblical scale.”

Slide below to see how the 4th reactor of Chernobyl Nuclear power plant looked before and after the installation of the new shield in 2016. Until then it was covered by an older casing installed shortly after the disaster. It served almost 30 years and needed to be changed for a long time.

Breus says Chernobyl is a museum, even though it does not have an official status of one. The Association of Chernobyl Tour Operators has even bigger plans for it. For the past couple of years, it has been working on getting UNESCO World Heritage status for the exclusion zone.

Faked travel documents and foreign weddings: Love in the time of COVID