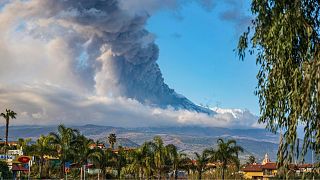 A fresh eruption from Mount Etna has created a 12-kilometre high ash cloud above the Italian island of Sicily.

The volcano, which overshadows the historic port city of Catania, is one of the most active in the world and is a designated UNESCO World Heritage Site.

After a period of relative quiet, Monday’s eruption was strong enough to be captured on satellite images from the International Space Station.

The towering cloud was visible across large parts of the Mediterranean island, prompting a warning for aircraft from Italy's National Institute of Geophysics and Volcanology.

Vincenzo Bellini, Sicily’s second largest international airport, was temporarily closed due to the eruption, with inbound flights diverted to Palermo.

There have been no immediate reports of injuries or property damage as a result of the lava flow.

Watch the video above to see the dramatic eruption for yourself.