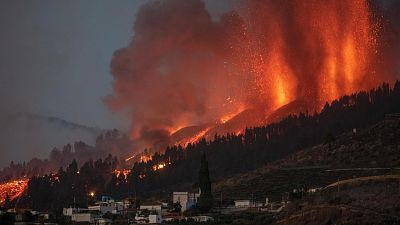 Lava continues to flow from a volcano on the Spanish Canary Island of La Palma after it erupted on Sunday.

No injuries have been reported as around 5,000 people were evacuated from surrounding villages. Spectators of this “wall of lava” have been asked to stay away to prevent roads close to the eruption from becoming too crowded for emergency services and evacuation efforts.

The regional president of the Canary Islands Ángel Víctor Torres warned there would be “considerable material damage” but hoped that there wouldn’t be any personal injuries. He told SER radio that officials were not expecting any further eruptions.

On the same day, an eruption to the southwest of Reykjavik became the longest that Iceland has witnessed in more than 50 years.

Lava first burst from a fissure close to Mount Fagradalsfjall on March 19 and six months later it has spewed out around 143 million cubic tonnes.

Dubbed ‘Fagradalshraun’ - or beautiful valley of lava - the spectacle has so far attracted around 300,000 visitors, according to the Iceland Tourist Board.

Do volcanoes have a cooling effect on the environment?

Volcanoes aren't a particularly big emitter of CO2 when compared to human-related sources.

But researchers at the University of Cambridge have recently found that human-caused climate change could have “important consequences” for how volcanic gasses interact with the atmosphere.

As the atmosphere warms, plumes of ash emitted by large, infrequent volcanic eruptions rise even higher. Climate change also means that particles from these clouds could move from the tropics to higher latitudes.

The combined effect of this is that the haze caused by volcanic eruptions would block more sunlight, increasing the temporary cooling effect they normally have.

For smaller eruptions, however, the cooling effect could be reduced by around 75 per cent. This is because the warming atmosphere makes it difficult for volcanic plumes to reach the stratosphere where they have a longer-lasting effect on the climate.

“The effects of climate change and some of the feedback loops it can cause are becoming more obvious now,” says co-author Dr Anja Schmidt.

“But the climate system is complex: getting a grasp of all these feedback loops is critical to understanding our planet and making accurate climate projections.”

So can volcanoes help slow down climate change?

A recent study by scientists at the UK’s University of Southampton discovered that in the past, chains of volcanoes may have also acted as a “safety valve” for the Earth’s climate.

“It is a balancing act,” says Professor Martin Palmer, co-author of the study.

“On one hand, these volcanoes pumped out large amounts of CO2 that increased atmospheric CO2. On the other hand, these same volcanoes helped remove that carbon via rapid weathering reactions.”

These ‘weathering reactions’ are when rocks at the Earth’s surface naturally break down and dissolve. The elements that are produced, such as calcium and magnesium, then make their way to the ocean via rivers. It is here that they form the minerals which help lock up CO2.

Dr Tom Gernon, another of the study’s authors warns that while this is a good thing, it does not mean nature can save us from climate change.

“Today, atmospheric CO2 levels are higher than at any time in the past 3 million years, and human-driven emissions are about 150 times larger than volcanic CO2 emissions,” he says.

It does, however, provide another potential avenue for researchers looking to reduce emissions. Artificially weathering rock by breaking it up and spreading it across the land could help to safely remove CO2 from the atmosphere.

“This is by no means a silver bullet solution to the climate crisis – we urgently need to reduce CO2 emissions in line with IPCC mitigation pathways, full stop,” Gernon says.

Large scale artificial weathering schemes could be “just one of the steps” needed to counteract climate change.