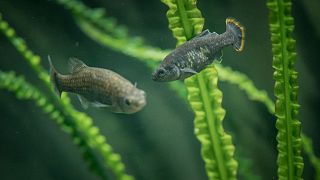 Get ready to grab the lime and salt, because it’s time to raise a shot glass to the Mexican tequila fish.

At just 7cm in length - about the width of a palm - the tiny tequila splitfin disappeared from the wild in 2003 due to the combined effects of water pollution and invasive exotic fish species.

But thanks to a special partnership between the UK’s Chester Zoo and the Michoacana University of Mexico, colonies of tequila fish are now thriving once more.

“This is the first time an extinct species of fish has ever been successfully reintroduced in Mexico and so it’s a real landmark for conservation,” says Professor Omar Dominguez, from the Michoacana University of Mexico.

What is a tequila splitfin?

The tequila splitfin is a freshwater species belonging to the Goodeid family of fish (named after American ichthyologist George Brown Goode) and is native to the Teuchitlán River in the state of Jalisco in south west Mexico.

Named after the Tequila Volcano which looms over its watery home, the species’ numbers declined rapidly in the 1990s.

Named after the Tequila Volcano which looms over its watery home, the species’ numbers declined rapidly in the 1990s. This led a group of scientists from Michoacana University’s Aquatic Biology Unit to look at ways of saving it.

In 1998, the university received five pairs of tequila splitfins from Ivan Dibble, an aquarist working at Chester Zoo. The ten fish were used to found a colony in the university’s laboratory, which was maintained by the scientists for the next 15 years.

How were the fish reintroduced to the wild?

After the establishment of a strong colony in the lab, 40 males and 40 females were chosen and released into artificial ponds in the grounds of the university. This exposed the fish to a semi-natural environment for the first time. As a result, they learnt to deal with competitors, predators and fluctuating resources.

Thankfully, the fish thrived, and within four years the 80 individuals had become 10,000. 1,500 of these have now been released into the wild.

The growth of the semi-wild fish colony coincided with two years of field surveys around the Teuchitlán River to find the best release sites. This included studies of zooplankton, fish and parasite numbers so that the tequila fish could be released into the best possible ecosystem.

The scientists also ran workshops with local communities, to improve awareness of the importance of maintaining healthy water systems.

The scientists also ran workshops with local communities, to improve awareness of the importance of maintaining healthy water systems. Local people will also be involved in the long-term monitoring of the project too.

​​“This is an important moment in the battle for species conservation,” says Dr Gerardo Garcia, Curator of Lower Vertebrates and Invertebrates at Chester Zoo.

“It is a real privilege to have helped save this charismatic little fish and it just goes to show that with the skill and expertise of conservationists, and with local communities fully invested in a reintroduction project, species can make a comeback from environments where they were once lost.”

The importance of zoos in conservation work

The reintroduction has also highlighted the crucial role that zoos can play in conservation work. A tiny species of snail was recently saved from extinction by two UK zoos, while critically endangered rhinos have also been successfully bred at Chester zoo too.

Dr Garcia says “This is also a great example of how good zoos can play a pivotal role in species conservation. Not only has Chester Zoo been involved technically and financially, the breeders, which became the founding population for the reintroduction of the tequila splitfin, originated at Chester Zoo.

“Without the zoo population keeping the species alive for many years, this fish would have been lost forever. It’s humbling to think that a small population, being cared for by aquarists in Chester, has now led to their revival in the wild.”