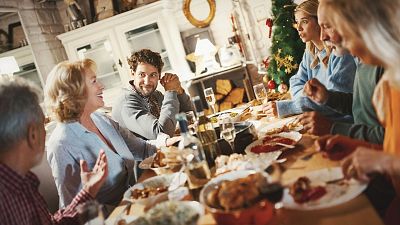 It would be an understatement to say that 2021 has been an eventful year. We're heading into Christmas right off the back of a historic COP26 with climate change at the front of many people's minds.

And in between other popular dinner table subjects, like politics, protests or the pandemic, you might find yourself wondering how to bring up your climate concerns.

We get it - environmental matters can often be divisive. Discussions can leave us disheartened, especially if the other party doesn’t share our convictions. We've all witnessed a dinner table political debate that has ended in disaster.

As a result, many of us are reluctant to initiate them.

While spending so much time around our families, it's inevitable that the issues which matter to us will come up. So how do we broach these often contentious topics?

There is no right answer - avoiding them altogether is fine too - but getting a sense of how others approach the problem can provide some ideas on how to start the conversation.

For young people, when their views don’t align with those in their family, discussions about climate change can be a particular source of tension.

Nell, an 18 year old medical student, started to question where her food was coming from and the impact it was having in her early teens. After initially changing to a pescatarian diet, then vegetarian, reading more about the environmental impact of dairy eventually led to her becoming vegan.

“There was definitely an initial backlash and a lack of acceptance when I changed my diet in response to the climate crisis,” Nell says.

“My decision to eat plant-based, to my parents, possibly felt like I was rejecting their heritage and the way they were brought up, and shunning it. I wonder whether it ever felt to them that I was rejecting how they'd tried to raise me; bringing up feelings of doubt in their parenting skills, their own moral compasses, and their own social responsibility in regards to the crisis.”

Starting an open, vulnerable conversation is one of the best things you can do.

There have been times where she wishes she hadn’t gone vegan - solely for the connection that comes from all sitting around a table together, eating the same thing.

But this hasn’t discouraged Nell and she thinks that her choices have helped her family to better understand the urgency of the situation.

“Starting an open, vulnerable conversation is one of the best things you can do.”

“Rather than announcing another change,” Nell suggests, “explain to your family why you're looking so hard to make changes; where you're finding information; naming other people who have done the same as you.”

Maybe, she says, you can even incorporate this explanation into time spent together with the people you love by suggesting you watch a documentary together. And she has some specific advice for anyone still living at home.

"If you announce you want to go vegan, you should be prepared for your family to respond in a variety of ways - anger, confusion, rejection, upset.

"These are all valid feelings, and it's important to remember it comes from the fact that your choice is making your loved ones question their own moral compass. Give it time, and answer as many questions as you can.

“One of the best things you can do is educate!”

Neil Hardiman, a 60-year-old engineer, uses a scientific approach to talk to people he knows about what can be done to solve the problems we face.

“I mainly seem to meet with scepticism at best,” he says, “I feel humanity has been deep programmed to think negatively about the climate crisis and that needs to change.”

He believes that science and engineering will provide the answers to a lot of problems to help make people’s lives better. When talking to friends and family he points them towards solution-based scientific information.

“A good start has already been made, but it would be good if people could start showing some interest in demanding not just climate change action, but the full restoration of the climate and every other aspect of the biosphere to its natural state.”

A casual discussion over dinner

It isn’t all just about presenting the facts. An open and frank discussion can go a long way to understanding why people have the responses that they do.

This is something photographer James Frederick Barrett has found during the dinner parties he organises. Here he brings 10 people together to talk about climate change over a meal. James says his even mum came to one of the gatherings where he hosts all kinds of different people - many that he doesn't know quite as well.

“To be honest I was just frustrated that when you’re out with friends or talking to people and you want to talk about climate change because it's going to be a big important part of all of our lives, sometimes it just kills the vibe,” he explains.

“People just shut off from it because they don’t want to think about it and you encounter these people in various stages of denial about it.”

It is mostly a 50/50 split between people who are already very knowledgeable about the cause and those that want to know more, he adds. But by the end of the dinner, most come away feeling like they have learnt a lot.

For James himself, guests talking and sharing their perspectives makes him feel more positive and helps him battle that feeling of eco-anxiety.

“It’s not about trying to win over everyone, but just about moving the people who do care to stick by their ethics and be effective leaders.

"Most environmentalists mess it up by not keeping a cool head and not listening to others. I have been guilty of this. It’s difficult because once you let the crisis into your heart, fighting it underpins your identity.”

The setting of the dinner party helps to foster casual discussion where everyone’s opinion is valuable, encouraging some to contribute where they might not otherwise do so.

“Being a good environmentalist”, he says,” is about being informed, prepared and a good listener.“

The IPCC produced a handbook in 2018 for experts, laying out the best way for them to communicate with the public about the science behind climate change. Although intended for professionals, it has a lot of tips that apply to everyday interactions with friends and family.

The guide says that, though facts are important, big numbers are often distant from people’s everyday reality.

Instead, it suggests telling a more human story. Who are you? Why are you passionate about what you are doing and what are the stories of those being directly affected by the consequences of our actions?

We’re hardwired to deal with stories, narratives that help us understand our place in the world.

We’re hardwired to deal with stories, narratives that help us understand our place in the world. Telling these stories is an important part of getting the people we interact with on a daily basis to understand the importance of coming together to solve these big, global problems.

In the end, your actions might speak louder than any words. Violent rebuttals and disbelief are something 16-year-old environmental activist Greta Thunberg has dealt with since before she became a household name.

In an interview with the BBC, she explained that the idea is not to shame others and tell them how to live their lives but to let your own convictions drive your behaviour.

One that sends a message to others around you about the reality of the climate crisis and raises awareness of what you can do to help.

'Humans putting too much pressure on environment': UN report author