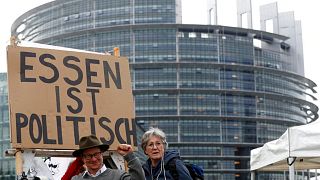 This week, EU lawmakers finalised new reforms for the bloc’s Common Agricultural Policy which will provide billions of euros in aid directly to farmers.

But #VoteThisCAPDown has been trending on social media for months now with environmentalists and green MEPs calling out the new policy for a perceived lack of ambition.

So what exactly is the CAP, and why have people been calling for European leaders to vote it down?

In the European Union, subsidies are paid to farmers through a programme called the Common Agricultural Policy or CAP.

There are a number of reasons why farming is treated differently to other businesses. Producing food can be unpredictable depending on factors like the weather, climate and diseases. There’s also often a delay between when products are needed and how quickly they can be produced.

On top of this, farmers’ income is on average around 40 per cent less than other industries.

These are the reasons that the EU lists for needing the CAP, to support income, deal with fluctuations in the market and introduce measures to help with the specific challenges of keeping us all fed.

Following years of negotiations, lawmakers have just finalised a reform for this programme that they say is better for the environment, animals and farmers. It will provide €270 billion in aid directly to European farmers.

Due to be implemented in January 2023, the bloc’s new agricultural policy will be in place until 2027 and it aims to help meet climate goals by improving sustainability.

As part of the new changes, EU member states will now have to make sure that at least 35 per cent of their rural development budget and 25 per cent of direct payments to farmers are dedicated to environmental and climate measures.

A minimum of one-tenth of the budget will also have to be used to support small and medium-sized farms. Before now, the CAP has paid out subsidies of around €50 billion a year, with 80 per cent of that money going to just 20 per cent of the biggest farms in the EU.

Commissioner for agriculture, Janusz Wojciechowski said after the vote to introduce the new deal that it brings us “one step close to a fair CAP for European farmers.”

“Today, Parliament also voted for a greener policy. It includes strong measures that can work for farmers on the ground, and help to reach the targets of the Green Deal.”

But, he added, the Green Deal is a political strategy and does not mean legal obligations for farmers. Wojciechowski also promised to ensure that it pays for farmers to take advantage of incentives to be friendlier to the environment, climate and animal welfare.

Why do some want to ‘#VoteThisCAPDown’?

Green groups and politicians are not as keen on the changes to the agricultural policy and #VoteTheCAPDown has been trending on Twitter for months.

They say that it doesn’t do enough to deliver the Green Deal, a set of proposals designed to cut greenhouse gas emissions by at least 55 per cent by 2030.

A group of environmentalists under the same banner as the hashtag also claim that the changes to the policy contribute to deforestation around the world and the exploitation of the Global South.

We want sustainable farming that is good for the climate, animals, farmers and consumers ???

The EU has the power to move this continent towards better agricultural policies.

But NOT with this CAP.

That is why we will:#VoteThisCAPdownpic.twitter.com/YgWbLLrtOt

They argue that as the CAP represents more than one-third of the EU’s budget, it should do more to keep global warming below 1.5C in a just way.

Swedish Fridays for Future founder, Greta Thunberg, was among those asking for European lawmakers to vote against the CAP. She tweeted that the proposed CAP would be “disastrous to the climate and environment” and was “not nearly in line with the Paris Agreement”.

This is our message to MEPs asking you to #VoteThisCAPdown. Listen to the voices of the future, we will never give up. pic.twitter.com/3VWcPbCccp

In a letter signed by more than 70,000 people, campaign group Withdraw The CAP says European leaders have “voted to prioritise profit and economic greed over preserving the planet’s habitability for humanity”

It adds that the CAP incentivises “harmful agricultural practices, and the loss of soil fertility and biodiversity, over sustainable choices.”

Although it has now been passed, they say it isn’t too late to make changes.

Now they are asking policymakers to withdraw the CAP before it comes into effect in 2023.