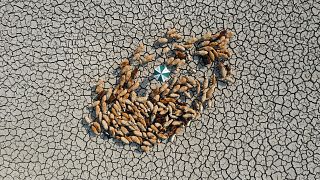 Announced at COP26 earlier this month, the winning photographs from this year’s Environmental Photographer of the Year awards come straight from the frontlines of the climate crisis.

Now in its 14th year, the competition showcases some of the world’s most striking environmental photography. And provides an international platform to raise awareness about the environmental issues putting our planet at risk.

The top award for Environmental Photographer of the Year was earned by Spanish photographer Antonio Aragón Renuncio for his photo titled ‘The Rising Tide Sons’, which shows a child sleeping inside his home, destroyed by coastal erosion on Afiadenyigba beach in Togo.

The photo shines a spotlight on the rising sea levels in West-African countries, which are forcing thousands of people to leave their homes.

Young Environmental Photographer of the Year went to Amaan Ali, for his fiery submission, ‘Inferno’, depicting a boy fighting surface fires in a forest near his home in Yamuna Ghat, New Delhi, India.

An area where forest fires caused by human activity are a common occurrence due to adverse living conditions.

The award for Environments of the Future went to Michele Lapini for her haunting photo titled ‘Flood’.

The photo depicts a house, submerged by the flooding of the River Panaro in Italy’s Po Valley, following heavy rainfall and melting snow.

Simone Tramonte was awarded the top prize in the Sustainable Cities category with his photo, ‘Net-zero transition: Photobioreactor’.

As Iceland shifts away from fossil fuels and attempts to produce 100 per cent of its electricity and heat from renewable sources, this photobioreactor will play a key role in the production of sustainable energy.

‘The Last Breath’ by Kevin Ochieng Onyango won the award for Climate Action.

The image depicts a boy taking in air filtered by a plant, with a sand storm brewing in the background, an artistic impression of the changes to come.

Sandipani Chattopadhyay took home the top award in the Water and Security category with their image, ‘Green Barrier’.

Irregular monsoon seasons and droughts in India’s West Bengal region have caused algal blooms on the Damodar river. Algal blooms prevent light from penetrating the surface and prevent oxygen absorption by the organisms beneath, impacting human health and habitats in the area.

And finally, the Resilient Award went to Ashraful Islam for their photo, ‘Survive for Alive’. Depicting a flock of sheep searching for grass among the cracked soil. Extreme droughts in Bangladesh have created hardships for all living beings.

These photos offer an enlightening and somewhat haunting glimpse into the environmental health of our planet as well as the challenges we will face in the future.

Although the jury has already announced this year’s winners, voting is still open in the People’s Choice category. You can head to the Environmental Photographer of the Year Instagram to vote for your favourite.

This year's competition was organised by environment and water management charity CIWEM and the documentary streaming platform WaterBear.