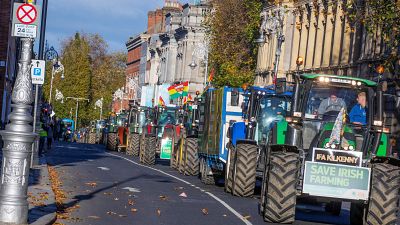 The Irish Farmers Association (IFA) took to the streets of Dublin yesterday to protest against the government’s Climate Action Plan.

Close to 100 tractors drove through the capital, ending in Merrion Square where the farmers held a rally outside government buildings.

The Climate Action Plan was released earlier this month and it requires that the agricultural sector reduce greenhouse gas emissions by 22 to 30 per cent by 2030.

Ireland currently has the highest methane emissions per capita of all EU member states, with much of this due to beef production.

Ireland currently has the highest methane emissions per capita of all EU member states, with much of this due to beef production.

Farmers from Laois, Offaly, Cork, Kerry and Tipperary depart from the Gandon Inn in Emo for @IFAmedia protest today in Dublin. Much scaled back due to current Covid situation pic.twitter.com/lOjlrMDAql

While the government claims the action plan “places farmers at the very centre” and that there will be “new income streams” to help farmers make the necessary changes, the IFA is worried by a new report from KPMG.

The report, ‘Ireland’s 2030 Carbon Emissions Targets - An Economic Impact Assessment for the Agricultural Sector’ predicts that if the Irish government demands a 30 per cent reduction in greenhouse gases, then 56,400 jobs will be lost in the sector by 2030.

Reaching 30 per cent would also require a 22 per cent reduction in beef farming in the country, which according to the Central Statistics Office, was home to 6.5 million cattle in 2013.

What do the farmers want?

The IFA is worried about the future of farming in Ireland and wants the government to ensure that any structural changes are sustainable, both economically and environmentally.

They are also concerned about recent changes to the EU’s Common Agricultural Policy. A provisional deal was reached in June of this year to reform the CAP which will see Ireland receiving €10.7 billion in subsidies by 2027.

Under the new deal, 25 per cent of payments to farms will have to be put towards eco-schemes. The EU is also pushing for internal convergence within member countries such as Ireland.

Under this scheme, the size of a farm is disregarded, along with any historical entitlements, and each farm receives a basic payment per hectare.

Under the new deal, 25 per cent of payments to farms will have to be put towards eco-schemes.

In practice, this means that 10 per cent of CAP payments in Ireland will be redistributed to smaller farms, meaning larger farms will receive less.

These changes, coupled with Ireland’s Climate Action Plan, are of great concern to the IFA, who believe they are being scapegoated by phrases such as ‘industrial agriculture’.

80 per cent of Ireland’s dairy cattle are grass-fed with an average of 70 cattle per farm, far from the industrial-scale cattle farming seen in other countries such as China and Australia, where thousands of cattle are kept on one farm.

What environmental changes are needed?

Under the revised Common Agricultural Policy, the EU has a set of environmental rules for its payments. These include farmers having to set aside a minimum of 4 per cent of their arable land to either: rewilding, re-conversion to peatlands or use in crop rotation to improve depleted soils.

The revised policy also sees new emphasis placed on smaller, family-run farms. These are less likely to use industrial farming methods and may cope better with the implementation of eco-schemes.

It is this reduction in payments to larger farms in order to fairly fund smaller farms that is worrying the IFA.

The IFA is also concerned that Irish farmers are being unfairly stigmatised by the media and wants the government to sit down with farming leaders to discuss their concerns.

How can Irish farmers be supported to a just transition?

The double whammy of changes needed to meet the targets of the Clime Action Plan and the funding requirements of the EU’s Common Agricultural Policy is asking a lot of an industry rooted in beef and dairy farming.

A just transition is a framework which enables workers to maintain jobs and security as a sector switches to a sustainable model. For the agricultural industry, this would mean incentives and subsidies to encourage farmers to invest in eco-schemes.

While the EU and the Irish Government argue that Irish farmers are being given these incentives, the IFA worry that the measures are aimed at reducing production, and will therefore lead to job losses.

Green financing isn't effective but Europe can fix it | View