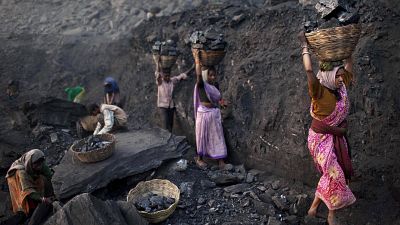 People carry baskets of coal scavenged illegally at an open-cast mine in the village of Bokapahari in the eastern Indian state of Jharkhand.   -   Copyright  Kevin Frayer/AP
By Marthe de Ferrer  •  Updated: 04/11/2021

In order to keep global warming below 1.5°C - or even 2°C - the science is unequivocally clear: we must stop burning fossil fuels.

That’s been the number one message from everyone I’ve spoken with at COP26 so far, from activists to scientists to policymakers.

The IPCC report in August was straightforward on this message. If we burn all the fossil fuels we’ve already extracted, we’d still be at risk of breaching 1.5°C. So if we continue to extract fossil fuels, breaching 1.5°C is almost a given.

I won’t spend more time here explaining why staying within 1.5°C of pre-industrial global temperatures is so vital - at this point, we all know the gravity of this target.

Today, on energy day at COP26, some provisional steps have been taken in reaching this goal of phasing out fossil fuels completely. More than 40 countries committed to ending coal use, while at least 25 countries and public finance institutions pledged to end public support for the fossil fuel sector by the end of next year.

Major banks also promised to effectively end all international public financing of coal power by the end of this year. It’s certainly not enough yet, but the International Energy Agency says that global warming will be limited to 1.8°C if all Glasgow pledges are fulfilled.

That’s a big if, but it’s at the very least a step in the right direction.

But as we’re discussing a move away from fossil fuels and towards clean and renewable energy, there’s an additional issue that needs attention - namely how to ensure a just transition.

What does it mean to have a ‘just transition’ away from fossil fuels?

The phrase ‘just transition’ is being bandied about at COP26 a lot, from the people I have interviewed to official policy documents. In fact, the Global Coal to Clean Power Transition Statement includes wording related to a “just transition away from coal.”

Official communications from the UNFCCC say, “a just transition to clean energy and the rapid phase-out of coal has been at the heart of the COP26 Presidency as part of its efforts to minimise temperature rises in line with the Paris Agreement.”

A just transition effectively means that the communities and countries which are reliant on fossil fuels for income aren’t left entirely in the lurch with a drastically weakened economy.

This is why things like a Green New Deal are so important, as they look at how to share the financial rewards from a green transition - supporting those who are most likely to lose economically from these vital measures.

Moving away from fossil fuels, and creating a green economy more broadly, has been forecast to lead to major economic benefits and opportunities. But in the short-term, there’s the potential for damage to communities - particularly those in the Global South.

“A just transition seeks to ensure that the substantial benefits of a green economy transition are shared widely, while also supporting those who stand to lose economically – be they countries, regions, industries, communities, workers or consumers,” explains the European Bank for Reconstruction and Development (EBRD).

“Whilst a just transition is mainly based on environmental considerations, it is also shaped by other structural changes affecting labour markets, such as globalisation, labour-saving technologies and the shift to services.

“A just transition is an integral part of many of the global commitments adopted by countries.”

In fact, the Paris Agreement says that “the imperatives of a just transition of the workforce and the creation of decent work and quality jobs in accordance with nationally defined development priorities.”

How can we fund a just transition?

Yesterday was finance day at COP26 - which is fundamentally at the heart of any just transition. In order to ensure countries and communities can fairly move away from fossil fuels, climate finance is a necessity.

By ending public funding of fossil fuels (and ideally private too), there are billions of euros that can be reallocated to support a clean energy transition.

Today 25 countries, including the US, Canada and the UK, committed to ending public support for fossil fuel by the end of next year. This could - and should - mean that €15.42 billion is available to put towards a just transition.

“This is a step in the right direction,” says Jacqueline Kimeu to Euronews Green, the coordinator of the Alliance of Civil Society Organisations for Clean Energy Access (ACCESS Coalition).

“That we have governments willing to phase out fossil fuels is really welcome...I hope we are going to see actions now to implement that commitment.”

Kimeu highlights how much Africa as a continent is reliant on fossil fuels as an energy source, despite significant renewable reserves.

“What we need now is support in terms of exploiting these resources...We want a just energy transition, a transition that is inclusive and involves communities.

“There are various communities that are relying on power plants for their survival. We want to transition to renewable energy that looks into what happens to these communities. We want alternative livelihood opportunities to be provided to those people.”

Kimeu continues, “this is a way that Global North countries can support in terms of paying, and compensating for the effects of polluting the environment.”

Earlier this year, researchers at the University of Oxford argued that despite Africa’s rich renewable energy resources, fossil fuels are likely to continue to make up two-thirds of energy consumption past 2030.

This is in large part because African nations haven’t had the same support, both in terms of finance and infrastructure, to decarbonise their energy systems.

That’s why this week’s International Just Energy Transition Partnership is so important. The groundbreaking agreement, between South Africa, Germany, France, the UK, the US and the EU, mobilises an initial commitment of €7.36 billion to support and accelerate South African’s decarbonisation.

Now we just need similar levels of support for the rest of the Global South.

Social policy will be key to EU's green transition | View

Half the water in a toilet flush could power your home