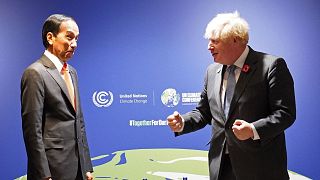 From finance yesterday to energy today, countries continue to hammer out the fine details of climate commitments made earlier in the week.

So what did they decide on day four of COP26?

Here are the biggest takeaways from today at the Glasgow climate summit:

Today at least 23 countries made new commitments to phase out coal power. Included in this list were five of the world's top two coal power-using nations.

The world's largest alliance on phasing out coal gained 28 new members. Chile and Singapore were two nations to join the Powering Past Coal Alliance which is co-chaired by the UK and Canada. And 20 new countries, including Vietnam, Poland and Morocco committed to building no new power plants.

UK business secretary Kwasi Kwarteng said that the commitments made on the sidelines of the UN climate summit meant the "end of coal is in sight."

Since the Paris Agreement was signed in 2015 there has been a 76 per cent reduction in the number of new coal power plants that are being planned. That amounts to the cancellation of more than 1,000GW of new coal plants.

"Securing a 190-strong coalition to phase out coal power and end support for new coal power plants and the Just Transition Declaration signed today show a real intentional commitment to not leave any nation behind," said Alok Sharma, COP26 president.

A number of big polluters are still missing from the major pledge to phase out coal.

The UK Labour Party's Ed Miliband said that were "glaring gaps" in these new goals including a lack of commitment from big emitters to stop increasing coal use domestically.

Although existing global warming targets require countries to stop burning coal, many major economies have set no date for ending its use.

An agreement that only tackles coal doesn't even solve half of the problem.

"An agreement that only tackles coal doesn't even solve half of the problem," says Murray Worthy, campaign leader at the organisation.

"Emissions from oil and gas already far outstrip coal and are booming, while coal is already entering a terminal decline."

Worthy adds that the science is "absolutely clear" on the fact that fossil fuels must be phased out entirely if we are to avoid the worst impacts of the climate emergency.

"This is a small step forward when what we needed was a giant leap."

3. Money is needed if we stand a chance of adapting to climate change, says UN

A new report from the United Nations Environment Programme (UNEP) calls for "urgent efforts" to increase financing and implementation of adaptation to climate change.

A new report by @UNEP presented at #COP26 calls for urgent efforts to increase financing & implementation of adapation to climate change.

UNEP executive director, Inger Andersen, said that while the world looks to "step up its efforts" in efforts to reduce greenhouse gases" it still needs to "dramatically up its game to adapt to climate change."

4. Indonesia backpedals on pledge to end deforestation by 2030

On Tuesday a landmark deal was signed by more than 100 nations, pledging to end deforestation and land degradation by 2030.

Now Indonesia, one of the countries that signed this pledge, has denied making any formal commitments.

Deputy Foreign Minister Mahendra Siregar said that the pledge to end deforestation was "false and misleading" with a statement released before the end of talks.

She added that green objectives could not afford to hinder the economic development of the country.

The Minister’s statement - that comes just one day after President Jokowi signed the COP26 Forests Deal - is profoundly disappointing.

But environmental charity Greenpeace has hit back at the announcement, criticising the Indonesian government for its decision.

"She should be at the vanguard of ensuring all Indonesian citizens can enjoy their right to an intact and healthy environment as mandated in the Indonesian Constitution."

The International Energy Agency (IEA) has revealed today that pledges made at COP26 so far put the world on track for 1.8 degrees of global warming.

New @IEA analysis shows that fully achieving all net zero pledges to date & the Global Methane Pledge by those who signed it would limit global warming to 1.8 C

A big step forward, but much more needed!

COP26 President Alok Sharma has said that he wants to use the climate summit to keep the chance of limiting global warming to 1.5C alive.

But this progress will only mean something if all of the pledges so far are fulfilled. Fatih Birol, executive director of the International Energy Agency, tweeted that it was a "big step forward, but much more needed."