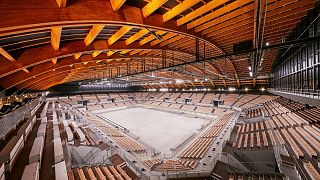 When the final torch bearer lights the Olympic cauldron in the Japan National Stadium on July 23, it will mark not only the start of the Games, but a new chapter in the country’s drive towards a sustainable future.

For the first time in the history of the Games, hydrogen is fuelling both the Olympic and Paralympic Cauldrons in Tokyo and the Olympic Torch during part of its journey through Japan. Electricity used to create the hydrogen comes from a solar array located in the Fukushima prefecture.

Already dubbed the “Hydrogen Olympics”, Tokyo 2020 is a showcase for the fuel of the future. As the most abundant element in the universe, hydrogen is clean and light. Most importantly, it produces no carbon dioxide emissions and can be produced using renewable electricity. Energy analysts believe hydrogen offers some of the best potential to reduce or eliminate emissions from airlines, shipping and industry.

“With their immense reach and visibility, the Olympic Games are a great opportunity to demonstrate technologies which can help tackle today’s challenges, such as climate change,” says Marie Sallois, Director for Sustainability at the International Olympic Committee.

“Tokyo 2020’s showcasing of hydrogen is just one example of how these Games will contribute to this goal.”

There is a growing political and business momentum for the widespread use of hydrogen. In 2017, Japan was one of the first countries to adopt a national hydrogen strategy, and the Japanese government more than doubled its hydrogen-related research and development to nearly US$300 million (€254,744,700) in the two years leading up to 2019.

Meanwhile, the Tokyo Metropolitan Government (TMG) established the Research Centre for a Hydrogen Energy-Based Society (ReHES) at Tokyo Technical University, as part of its commitment to a hydrogen-based future economy. ReHES has been behind many of the recent developments in hydrogen technology.

It is hoped that the Tokyo 2020 Games will leave a hydrogen society as its legacy.

Just as the Olympic Games Tokyo 1964 left the Shinkansen high-speed train system as its legacy, it is hoped that the Tokyo 2020 Games will leave a hydrogen society as its legacy.

As part of its preparations for Tokyo 2020, and to ensure a sufficient supply of hydrogen, one of the world’s biggest hydrogen plants has been built in Fukushima Prefecture.

The plant in the town of Namie uses up to 10,000 kilowatts of solar power to produce 900 tonnes of hydrogen each year. Tokyo is also home to what is claimed to be the world’s first hotel powered in part by hydrogen derived from plastic waste. The Kawasaki King Skyfront Tokyu REI Hotel has a fuel cell generating carbon-free electricity and hot water used in guest rooms.

Hydrogen on the move

Worldwide Olympic Partner Toyota has provided a fleet of 500 hydrogen FCEV Mirai cars - the same model used by the International Olympic Committee at its headquarters in Switzerland.

Toyota has also provided 100 FCEV Sora buses - the name Sora is an acronym for the water cycle: sky, ocean, river, air - each carrying 79 passengers and powered by 10 high pressure tanks capable of storing 600 litres of hydrogen. A fleet of FCEV fork-lift trucks is being used to transport heavy equipment, and an additional 35 hydrogen fuelling stations have been installed around the city.

Tokyo intends to continue evolving with a view to becoming a more sustainable city and an inspiration to the world.

TMG is aiming for 80 stations and 100,000 hydrogen FCEVs on the capital’s roads by 2025. As it said in 2018, “Looking ahead to the Olympic and Paralympic Games and beyond, Tokyo intends to continue evolving with a view to becoming a more sustainable city and an inspiration to the world.”

Built at the intersection of the Heritage and Tokyo Bay Zones, the Olympic Village lies on reclaimed land on the site originally planned for the Olympic Games Tokyo 1940.

Embodying the spirit of ‘tradition meets innovation’, the village uses hydrogen to provide heat, hot water and light in dormitories, cafeterias and training facilities for 11,000 athletes. Electricity used by the facility is generated with hydrogen using pure-hydrogen fuel cells.

The Tokyo 2020 Olympic Village is Japan’s first full-scale hydrogen infrastructure. After the Games, it will be turned into hydrogen powered flats, a school, shops and other facilities. It’s been designed to demonstrate an urban lifestyle that is environmentally friendly, socially inclusive and technologically advanced.

“The Tokyo 2020 Games are being asked a crucial question, which is this: What value can be discovered in holding the Games and engaging in sport within the context of the ongoing COVID-19 crisis?,” said Tokyo 2020 President Hashimoto Seiko in a statement to the update of the Tokyo 2020 pre-Games sustainability report, published at the beginning of July.

She added, “Now is our opportunity to show the world the inherent power of sport and set an example of a more sustainable Games, as expressed by the Games Vision.

“Sport has the power to change the world and our future. This is the legacy we aim to leave for future Games.”

Brisbane to host the 2032 Olympic Games