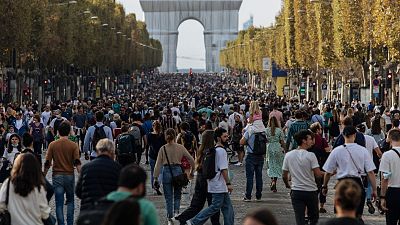 But sights such as these, from the London parklets campaign last month, or people strolling down the middle of the Champs-Élysées in Paris, are increasingly common as we reimagine our city centres.

Greener cities come in many shades, and it’s not just a question of banning cars, but coming up with inspiring alternatives.

The COVID-19 pandemic has fast-tracked the travel revolution in some places, with walkways widened and cycle infrastructure flourishing. As more evidence of the damaging effects of air pollution emerges, should we be reclaiming even more ground?

Here are some of the strategies being used across Europe, to help improve the lives of citizens, as mapped out by climate charity Possible.

One UK man who has been taking town planning into his own hands is Adam Tranter, Bicycle Mayor for Coventry. When the mini garden he built in a parking space was removed by the local council, Adam found a loophole by replanting his parklet on top of a truck.

London Parklets Campaign founder Brenda Puech has big ambitions for parklets. On the first ‘People Parking Day’ in September, Londoners commandeered some of the city’s 1 million parking spots for fun and games.

“Not everyone is lucky enough to have a private garden so providing social spaces close to people’s homes is essential,” she said.

In Northern Spain, the city of Pontevedra banned cars from its 300,000 square metre medieval centre in the early 2000s, and its people have reaped the economic, social and health benefits ever since. CO2 emissions are down by 70 per cent, and central Pontevedra has attracted some 12,000 new inhabitants.

Desmogging Europe’s historic cities 365 days a year is a big task, but as more green schemes gain public approval, it’s a challenge the continent can rise to.