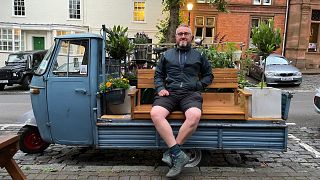 A parklet on a motor vehicle is not a concept you see very often.

However, in Coventry, UK, one man decided to make this concept a reality.

Adam Tranter, is the founder of communications agency Fusion Media and works as the Bicycle Mayor for Coventry, campaigning to encourage more people to cycle for better personal health and the improvement of the environment.

He converted a 1970s Piaggio Ape flatbed truck into a mini parklet as a way to create some green space for locals in his community to stop by and unwind.

Looking to deliver a short-term solution to the lack of public spaces in his area, Adam’s aim with the conversion project was to create a parklet that would help to make his area more attractive.

Discussing his reasons for undertaking the project, Adam explains that he wanted to highlight the ways in which councils use space in local communities and whether this usage is the most beneficial thing for people.

“The bigger picture is that we (local boroughs) have dedicated so much space to the storage of private motor vehicles, that it's actually not having a great effect on how our places look and how good they are for people walking, people cycling and even for people using cars. We want to make these places destinations,” he says.

From flatbed truck to motorised parklet

Initially, Adam built a mini-garden in a parking space, before it was removed by the council for violating regulations.

He had built a parklet on a parking space by laying down some astroturf, adding planters and chairs for people to “sit and enjoy the space.” While at first, he thought the garden would only last for a couple of days, it remained in place for nearly seven months before it was removed.

“Unfortunately, one person had complained about the loss of parking effectively,” Adam explains, “and the council came and took away the little parklet that we had made....and I guess I came out thinking, well what do we do next?”

Undeterred, Adam could see the benefits that parklets had in the area and was confident that a mini green space was something people in his community wanted. However, he knew that any other attempts to create one on a parking space would need to meet council guidelines about parklets as well as the appropriate use of car parking spaces.

“With the help of some friends, I came up with this idea to build a new parklet which would not only comply with the system, but will make people think about that system, and also give people a place that everybody can enjoy,” he says.

Inspired by a story from San Francisco, where a group of friends held a picnic party in a car parking space to protest the fact that public spaces were being overrun by car parking, Adam became fascinated with the way in which people interact with public spaces.

He was also interested in the ways society thinks about public spaces and decided to initiate this project as an experiment.

Living in a town at the heart of the UK motor industry, Adam was able to find many engineers and mechanics to help him convert the truck into a parklet, installing benches, plant pots and securing everything in place on the truck.

He also made sure to sort out the legal paperwork for the vehicle, registering the truck, paying for insurance, taxes and a parking permit. The whole process took him and his friends a little over a month to complete.

I built a parklet in a car parking space but it was removed by the council because it wasn’t a motor vehicle.

I’ve now built a parklet which is a motor vehicle and so the space for the community is back. Enjoy! pic.twitter.com/d8YKiw75Io

Adam’s parklet project highlights a wider issue within the community and across many areas in the UK: the use of public spaces and how beneficial it is for local communities.

Because of the need to accommodate our growing population, along with the increasing number of car owners, the limited public spaces available are frequently being repurposed to tackle these issues.

At the end of 2020, there were 31.7 million cars licensed in Great Britain (and 32.7 million in the UK). Over the past 25 years, the number of cars in Britain has risen 42.5 per cent and it is predicted that if growth continues at the same rate that there could be as many as 45 million cars on British roads by 2045.

It is clear that more car parking spaces are needed to accommodate the growing number of cars on Britain’s roads and that more space is being devoted to cars. However, this can come at the detriment of public spaces that are used for leisure and can make towns and cities less habitable.

This is why creating a parklet out of a car parking space was important to Adam.

“One car parking space really only makes one person happy at that time, whereas a parklet in a community, in a parking space, will be useful for the whole community and could potentially make hundreds of people happy in a day.”

Public spaces, and green spaces in particular, is something that many councils have had to start prioritising more. Yet too often these spaces are used to meet local authority demands for housing and parking spaces, which can sometimes be in direct contrast with how locals would like to see the public spaces in their area used.

Adam believes that communities should have more of a say in how public spaces are utilised and that the process should become more participatory. If people take more ownership of the places that they live in, they will ultimately take more pride in their areas. That would translate into more concern about how their public spaces are being used which could improve the way areas look.

The solution is pretty straightforward to Adam. If councils make the planning processes more participatory then people would have more power to determine what their area should look like. This would shift the focus away from creating public spaces that prioritise cars and parking and re-positions this energy on spaces that can directly serve people.

However, “it’s proving very difficult to make happen”, Adam adds, “the system is so entrenched with valuing parking above people.”

How has the public reacted?

Public responses to the motor vehicle parklet have been widely positive. Many people have stopped by to visit the parklet, taking photos of the vehicle and making the most of the new public space that has been created.

The parklet, which features a QR code for people to send their feedback, has received plenty of supportive comments from the people within Adam’s community. The positive feedback has shown Adam that people do like the idea of a parklet on a parking space and that using public spaces for something different could really support the local community.

Online, the reaction to Adam’s parklet has also been overwhelmingly positive, with people praising the innovativeness of the project. Many people also empathised with the lack of public spaces for people to just sit down and also expressed desires to see similar projects in their area.

And the council’s reaction? “Nothing has happened. But they (the council) have sent people to come and check it out, so we’ll see”, Adam responds.

Could motor vehicle parklets become a thing of the future?

“I think motorised parklets are a symptom of a weird system that allows motor vehicles to park everywhere and for people to be left with the scraps of the space. But I would love to see parklets everywhere.” Adam concludes.

He acknowledges the fact that motorised vehicles are not the blanket solution to the problem of lack of public spaces in local areas.

However, he believes that developing more parklets is something that all councils and even local communities should strive to achieve, as parklets can solve a range of different problems in local areas.

Incorporating creative solutions to tackle local development problems is just one way people can do what they can to improve their local towns and cities. The parklet Adam created was a metaphor for these bigger issues at play.

For Adam, his main hope is that more people will have a think about how our space is used and how much space we give over to car parking. He would like more work to be done to make local areas, and high streets in particular, better destinations for people to visit.

In regards to whether he sees himself creating any more motor vehicle parklets in the future, he’s still undecided.

“Our spaces are changing really quickly, and we need to reprioritise them so anything I can do to raise awareness about the need is important.”