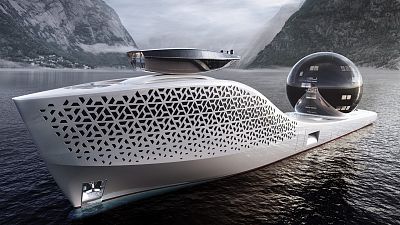 It may look like something from the new James Bond film, but the Earth 300 is a nuclear-powered superyacht with bold ambitions.

Although it hasn’t been built yet, this carbon-free yacht is designed as a travelling laboratory for scientists to explore the oceans and tackle today’s biggest environmental problems. With room for 22 laboratories, 160 scientists and 20 students, the yacht will be powered by a Molten Salt Reactor - a new type of nuclear power that is 100 per cent emission-free.

There’s room for tourists, but at a price.

Designed by superyacht expert Ivan Salas Jefferson, the Earth 300 will also have room for 40 VIP guests who will pay a whopping $3 million (€2.5 million) for the pleasure of staying aboard the vessel. Scientists and students will either travel for free or at a reduced rate.

“We want to build a global icon for science, designed as a scientific sculpture on the seas, to capture people’s attention and inspire their imagination,” says Aaron Olivera, the CEO of Earth 300. The company hopes the superyacht will be ready to set sail in 2025.

The rise of the superyacht

Demand for superyachts has rocketed in the past 10 years, spurred on by the COVID-19 pandemic and the increase of the global ‘super rich’. The Earth 300 will be the biggest of the lot though, at 300 metres in length and 60 metres in height. That’s 31m longer than the Titanic.

With a futuristic, architectural design, the boat will include state-of-the-art weather visualisation labs, 3D printing labs and biosafety labs designed to handle viruses like COVID-19, according to Oliveria.

The Earth 300 will be the biggest of the lot though, at 300 metres in length and 60 metres in height. That’s 31m longer than the Titanic.

"Earth 300 will use global systems thinking, aboard the vessel we will explore the broadest spectrum of standpoints, bringing together the smartest and brightest minds to create an intelligence collective that is unrivalled in scope and diversity,” says Oliveria.

“It will hold 4 different communities - scientists, experts, students and private citizens.” It is this mix of citizens and scientists that the team hopes will produce radical new thinking in the fight against climate change.

Is the technology ready yet?

While the design of the Earth 300 is a futuristic one, much of the technology required has not come to market yet. Initially, the yacht will be powered by green fuels, as the Molten Salt Reactor is still in development. The reactor is being developed by Terrapower, a company backed by Microsoft billionaire Bill Gates.

Once it is ready, the reactor will be retrofitted, allowing the superyacht to be 100 per cent emission-free.

Oliveria, who has a background in developing luxury resorts, was inspired to create the Earth 300 after going for a dive in the Maldives.

After seeing the dying corals, he realised the world didn’t need another elite resort. Oliveria decided to change tack to work on the Earth 300, combining luxury travel and climate fighting science all in one place.

Meet the photographers capturing the frontlines of the climate crisis