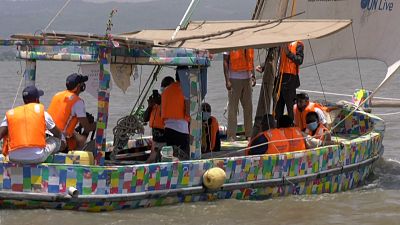 The world's first sailing dhow made out of recycled plastic sails the waters of Lake Victoria in Kenya.   -   Copyright  AFP
By Doloresz Katanich  with AFP  •  Updated: 07/03/2021

The 'Flipflopi vessel' is the first ever ship made out of recycled plastic.

It sets sail on Lake Victoria in Kenya this week to promote an awareness campaign around plastic pollution.

Activists onboard will meet business leaders, community leaders and even school children in three countries on their journey (Kenya, Tanzania and Uganda). Their goal is to highlight the impact of pollution on both the lake environment and human health.

The Flipflopi movement has already made multiple expeditions with this unique ship over the last four years.

The rainbow-coloured 9 metre-long sailing boat is made of 9 tonnes of waste collected from local beaches, including 30,000 multicoloured flip flops.

In the last four years, the movement has joined forces with organisations like the United Nations Environment Programme (UNEP) to advocate against marine pollution.

They have also created innovation hubs and circular economy start-ups.

"We've actually set up waste management projects on the South Coast of Kenya, in Lamu, and now we're opening one in Kisumu with the recycling machinery," says co-founder of the FlipFlopi project Dipesh Pabari.

"Our point now is to see whether we can stimulate a circular economy surrounding waste as well."

The founders of the FlipFlopi project hope they can create a movement where people use recycled waste to build boats and other ships.