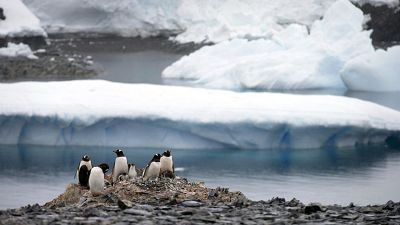 Antarctic ozone holes are not just a matter of UV radiations for penguins and algae, but its impacts are not yet fully understood.   -   Copyright  AP Photo/Natacha Pisarenko, File   -   Natacha Pisarenko
By Rafael Cereceda  •  Updated: 27/09/2021

What happens in the stratosphere stays in the stratosphere? How does the ozone hole influence the weather and climate? The Copernicus Atmosphere Monitoring Service (CAMS) team revealed earlier this month that the 2021 ozone hole is among the largest on record, in fact "larger than 75 per cent of ozone holes at that stage in the season since 1979".

It has even been bigger than Antarctica itself recently. But beyond the multiplication of UV radiation over the Frozen Continent, how does the ozone hole affect you and me? Does it worsen climate change and global warming, or is it only a matter of overly sun-tanned penguins and blooming algae at the bottom of the world?

To try to better understand the impacts of the ozone hole on the Earth’s climate system Euronews reached Vincent-Henri Peuch, Director of the ECMWF Copernicus Atmosphere Monitoring Service.

Last year, a study published in Nature magazine saw a clear correlation between a possible ozone layer recovery, which the study attributed to the CFC ban of the Montreal Protocol, and a "pause" in the atmospheric circulation trends in the Southern Hemisphere.

From the 1990's, scientists observed several changes in the weather patterns of the Southern Hemisphere that were attributed to ozone depletion. These included reducing precipitation over Australia or expanding South America's tropical rain belt to Uruguay or Northern Argentina, opening new fields for agriculture in lands previously too dry.

The Nature study was updated in January 2020, right after the ozone hole reached it's smallest ever recorded size, creating optimism over how it would evolve in the future.

Then came the 2020 season, when scientists observed the longest-lasting ozone hole ever recorded, carrying on until end December, with a huge surface of nearly 25 million square meters at its maximum.

And now the ozone layer is behaving in unexpected ways yet again this year, with a sudden growth in September.

Meanwhile, at the other extremity of planet Earth, a surprising Arctic ozone hole appeared in March 2020, right in the very middle of the COVID-19 lockdowns.

Speaking about the 2020 Nature study, Vincent-Henri Peuch believes we may have claimed victory too early. "The paper said that the Montreal Protocol allowed not only to make the ozone hole disappear but also to counter the progression of the polar vortex to the South Pole pushing it further. It was released in 2020, after a particularly small ozone hole. I think it was a bit audacious, because we've seen there's a very strong variability from one year to another".

So all that for nothing?

"If we keep avoiding CFC emissions we will come back to normal but more slowly than expected, possibly due to climate change" Peuch tells Euronews. "We expect the ozone hole to be closed by 2060 or 2070 so the scales of two or three years don't give enough perspective".

What is the impact of the ozone hole on weather and climate?

It’s widely accepted that the ozone hole pushes the polar vortex further South, squeezing it around the Pole, and as it becomes smaller, its winds also become stronger.

This has had impacts in the Southern Hemisphere circulation. Some are well understood by scientists but Vincent-Henri Peuch warns about drawing swift conclusions: "It's all about fluids, so everything is connected. These planetary movements are not independent, but how do they interact precisely?”

“It's complicated to spot very direct cause and effect mechanisms," says Peuch. "We see long-term trends and we manage to understand that if the polar vortex is smaller, the Hadley Cell might become bigger, and we can learn how the weather patterns, the precipitation here and there could be modified".

For Peuch, while today climate scientists understand some correlations between the ozone hole and weather patterns, the interactions between the stratosphere and the troposphere are not very well known yet. "It is still difficult for climate models to reproduce what happens in the stratosphere, we have far less observations than for the troposphere.”

It would be an absolute dream to connect anomalies in the stratosphere with weather trends, it would incredibly enhance our seasonal forecast capacities

“We still have a lot of work ahead to properly understand the coupling between what happens in the stratosphere and the impacts at our level, on the weather events, rains, storms and so on" he says. "It would be an absolute dream to connect anomalies in the stratosphere with weather trends, it would incredibly enhance our seasonal forecast capacities, as for our Climate Change Service but as far as I know there is no such a model.” Peuch believes that science has to remain humble regarding its capabilities to establish direct links.

The ozone hole has actually a small cooling effect, as it evacuates greenhouse gases into space.

UV radiation has some impacts on the Antarctic ecosystem, not yet fully understood, favoring decomposition of organic matter, increasing the release of greenhouse gases and warming the ocean. UV radiation doesn't have a direct warming effect.

Its incidence on skin cancer, eyes or immune system disorders is well known.

Then what is the impact of climate change in the ozone hole?

Global warming makes our troposphere warmer but tends to cool the stratosphere, strengthening the ozone depletion abilities of the polar vortex.

According to some studies, the bewildering Arctic ozone hole of March 2020 was possibly caused by record warm temperatures in the North Pacific.

The tiny 2019 ozone hole was triggered by a rare sudden stratospheric warming event.

So it’s likely that climate change will make these conditions more frequent. "We expect climate change to delay the ozone layer recovery" says Peuch, recalling that given the variability of the previous seasons, we can’t claim a clear trends in ozone recovery just yet.