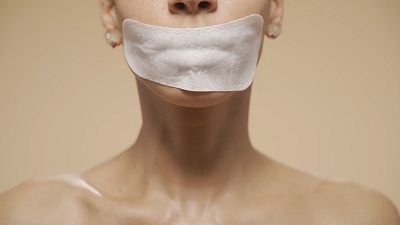 The LastPad campaign is trying to reduce the number of disposable period products we use.   -   Copyright  LastObject
By Rosie Frost  •  Updated: 18/09/2021

A Kickstarter for a reusable period pad has raised more than 20 times its initial fundraising goal.

The success of LastPad’s campaign could be down to a hilarious promotional video that takes aim at “sh**ty” disposable period products.

“You think you’re having a bad week?” it asks, “Mother Earth has been suffering for over a century.”

Contrasted with the humour are some sobering facts about the waste that traditional feminine hygiene products generate.

The video claims that menstuators use 400 pounds (181kg) of single-use pads every year. Many of these are up to 90 per cent plastic which can take 500 years to decompose.

The power of crowdfunding

The Danish company behind the product, LastObject, has already funded the creation of a number of products like this. Previous campaigns have been backed by more than 46,000 backers with the brand's flagship product, the LastSwab, raising over $1.2 million (€1.02 million).

“The reason why we use crowdfunding campaigns, it's actually not because of the funding, we could fund it ourselves at this point.

“But it's very important for us to validate our products, and especially because a lot of them are completely new products.”

Kickstarter is a male-dominated platform, so Aagard wasn’t sure that a product like this would take off. But with nearly 3000 backers so far, the response has been phenomenal.

The most sustainable design is not to design something

Aagaard hopes that the company’s work can put a dent in a “huge, trillion-dollar” industry that she doesn’t believe should exist.

“Our mission is to create reusable items that eliminate the need for single-use items,” explains Aagaard.

“And that kind of was mind-boggling,” she laughs.

Packaging and shipping are a big part of the problem

It isn’t just the products themselves but the process that creates them which contributes to the mountains of waste we create each year. Aagaard wants people to understand the journey these products go on before they are sold to us.

UN warns of record greenhouse gas levels ahead of COP26