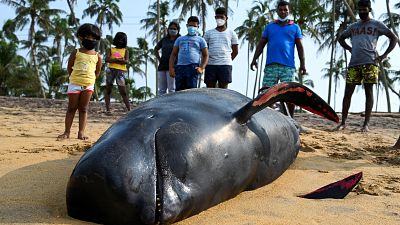 Over 100 pilot whales have been saved after being stranded on Sri Lanka’s southwest coast.

A combination of the national navy and volunteers worked together on an overnight operation to push the whales back out to sea in Panadura, Sri Lanka. Despite the fact this was the island nation’s biggest ever beaching event, the vast majority of the animals were rescued with only two believed to have died on the beach.

“We used our small inshore patrol craft to pull the whales one by one back into deeper waters. Sadly, two whales have died of the injuries sustained when they beached,” navy spokesperson Indika de Silva told AFP.

Local villagers joined the rescue mission amid a coronavirus curfew in the area, all to save the stranded whales.

Although strandings are relatively common, scientists are still unsure as to why they happen. If they aren’t assisted back into the water, many whales die of dehydration, collapsing under their own weight, or drown when the hightide covers up their blowhole.

The Panadura incident has been confirmed as the largest single pod of whales stranded in the south Asian country by Sri Lanka’s Marine Environment Protection Authority (MEPA).

“It is very unusual for such a large number to reach our shores,” MEPA chief, Dharshani Lahandapura, told AFP.

Are pilot whales in danger?

Pilot whales can grow up to 6 metres (20 feet) long and weigh a tonne. They are highly social animals. The short-finned species, such as those in Sri Lanka, have been nicknamed “cheetahs of the deep sea” for their deep, high-speed, sprint-dives to chase and capture large squid, according to Whale & Dolphin Conservation.

Apart from the threat of beaching, pilot whales also face challenges due to human activity. From becoming entangled in fishing gear, to hunting in areas like Japan, short-finned pilot whales often find themselves in jeopardy. They can also become victims of vessel strikes, which injure or kill them. Scarred short-finned pilot whales have been observed in Hawaiian waters, according to the US National Marine Fisheries Service.

Charities like WWF and Save the Whales are working hard to preserve the ocean and its inhabitants. While pilot whales are not on the endangered list, other species such as blue whales are. Whales are at the top of the food chain and play an important role in the overall health of the marine environment, which is why it remains so important to protect them.