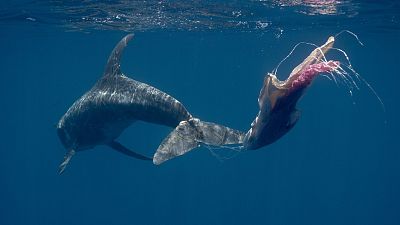 Endangered turtles and dolphins species in the River Ganges are at risk from becoming entangled in abandoned fishing gear, new research has found.

A survey of discarded fishing equipment, also known as ‘ghost gear’, was carried out along the entire length of the Ganges - from its source in the Himalayas to the river mouth in Bangladesh. The team of scientists found that entanglement in this plastic waste could harm critically endangered three-striped roofed turtles and the endangered Ganges river dolphin.

Dr Sarah Nelms from the Centre for Ecology and Conservation at Exeter University says that before now, no research had been done into plastic pollution from fishing in the area. The new study found that plastic nets were the most common type of ghost gear found.

“There is no system for fishers to recycle their nets,” she says. "Most fishers told us they mend and repurpose nets if they can, but if they can't do that the nets are often discarded in the river.

"Many held the view that the river 'cleans it away', so one useful step would be to raise awareness of the real environmental impacts.”

What is ghost gear?

Ghost gear is “the most deadly form of marine plastic” and makes up 10 per cent of all waste found in our oceans, according to WWF. The term refers to lost, abandoned or discarded fishing equipment like nets, and ropes. It can be found in both rivers, like the Ganges, and seas.

Because the nets are explicitly designed to catch fish, animals easily become caught up in them. Once trapped, they can end up dying a slow, painful death from suffocation or exhaustion. The world’s rarest marine mammal, the vaquita porpoise, has been pushed to the brink of extinction because of ghost gear.

The world’s rarest marine mammal, the vaquita porpoise, has been pushed to the brink of extinction because of ghost gear.

“While the consequences of plastic waste are finally starting to receive the attention they deserve, there’s still too little awareness about the catastrophic harm caused by ghost gear,” says Macro Lambertini, Director General of WWF International.

“It can linger in our oceans for centuries, wreaking havoc like some kind of immortal menace: continuously and cruelly killing whales, dolphins, seals, seabirds, turtles and sharks, and damaging vital ocean habitats.”

Solutions to ghost gear in the River Ganges

The survey of fishing waste in the River Ganges is being carried out by an international team as part of the National Geographic Society’s ‘Sea to Source: Ganges’ expedition. Co-lead of the expedition, Professor Heather Koldewey, explains that the types of materials used to make the gear may offer hope for a solution.

"A high proportion of the fishing gear we found was made of nylon 6, which is valuable and can be used to make products including carpets and clothing," she says.

“Collection and recycling of nylon 6 has strong potential as a solution because it would cut plastic pollution and provide an income.”

A similar project to clear up discarded fishing waste in the Philippines has been so successful that it has become its own, standalone social enterprise, the professor adds.