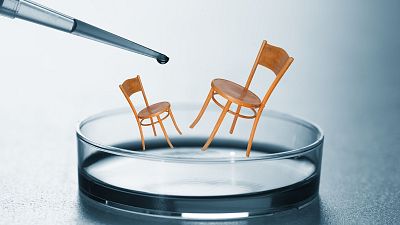 Wooden furniture could theoretically be grown fully formed without the need for screws or glue.   -   Copyright  Getty via Canva
By Rosie Frost  •  Updated: 05/05/2021

Tables and chairs grown in a lab could help to slow deforestation, according to a study at the Massachusetts Institute of Technology.

The concept is similar to lab grown meat. Scientists create structures made of plant cells that mimic wood, but without needing to chop down forests in the process.

The wood-like plant tissue is grown indoors without soil or sunlight. The original cells don’t derive from trees but instead, a colourful flowering plant called a zinnia that is native to Mexico. These cells are then turned into a rigid structure using plant hormones.

“Plant cells are similar to stem cells in the sense that they can become anything if they are induced to,” study author Luis F. Velásquez-García told MIT news.

The lab grown wood can be manipulated to take on any shape, much like 3D printing. That means that a fully formed table could theoretically be created without the need for screws or glue.

The lab grown wood can be manipulated to take on any shape, much like 3D printing.

The team is still a long way from actually growing a table, but they say it could mean we’ll be able to make furniture without the need for deforestation in the future. Scaling up the production would take “significant financial and intellectual investment”, say the experts, but they believe it could ease the impact of forestry and agriculture.

“The way we get these materials hasn’t changed in centuries and is very inefficient,” Velásquez-García says.

“This is a real chance to bypass all that inefficiency.”

The problem with wood

Current systems for producing these materials place “unsustainable demands” on the environment, says the team’s paper, published in the Journal of Cleaner Production. Both consumption of wood and the process of clearing to access arable land led to the loss of an area of natural forest roughly twice the size of France between 1990 and 2016.

Deforestation not only removes the possibility for these trees to act as a carbon sink but also puts animals at risk. Forests support around 80 per cent of all species living on land.

Lead author of the paper, Ashley Beckwith, says she was inspired after visiting a farm to try and make our use of land more efficient.

“That got me thinking: Can we be more strategic about what we’re getting out of our process? Can we get more yield for our inputs?” she told MIT news.

“I wanted to find a more efficient way to use land and resources so that we could let more arable areas remain wild, or to remain lower production but allow for greater biodiversity.”