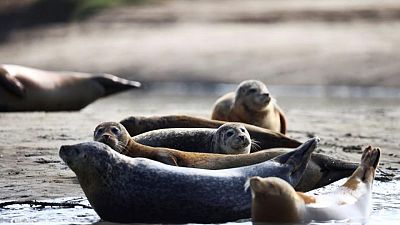 The number of seals living in Britain's Thames Estuary has dipped slightly.

However, the thriving colony of the predators is testament to just how far the river has recovered since it was declared dead in the 1950s, researchers said.

An August survey by the Zoological Society of London (ZSL) found that the Thames Estuary is home to 2,866 grey and 797 harbour seals, down from 3,243 grey seals and 932 harbour seals in 2019 when the last survey was taken.

"Changes in number can be down to a few factors, such as the variability in the proportion of seals at sea whilst the survey is taking place, but this is something we want to keep a close eye on," ZSL Conservation Biologist Thea Cox said.

"We still have a long way to go in terms of improving water quality and making space for nature, but this healthy, thriving population shows how conservation measures really work – and just how far the Thames has come since it was declared biologically dead in the 1950s."

Besides seals, the Thames is also home to species such as the European eel, the Dover sole and the short-snouted seahorse.