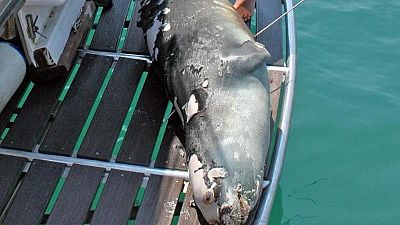 Residents of a small Greek island have expressed their outrage at the “deliberate killing” of a seal they had all come to love.

“The innocent and unaware seal was executed at close range with a spear gun that had a large spear for exactly that purpose,” local NGO MOm announced in a Facebook post at the weekend. MOm, or Monachus Monachus, work to protect the endangered Mediterranean monk seal.

Kostis, a young monk seal, became the mascot for the island of Alonissos after he survived 2018’s Cyclone Zorbas. He was named after the fisherman who saved him from the cyclone. Kostis had since become a popular figure amongst locals.They found him to be adorable and very friendly.

“I despair of human beings and the cruelty they inflict.”

At the moment, it is not clear why Kostis was killed, but the Central Port Authority is investigating. A search is also underway for whoever committed the crime. As the island is part of the Alonissos and Northern Sporades Marine Park, harming plants or sealife is punishable with fines.

Comments flooded in from the public, shocked to hear the news of Kostis’ death. One commenter expressed her frustrations, saying: “I despair of human beings and the cruelty they inflict.”

MOm have said that they will be filing charges against all responsible parties.

Kostis was a local celebrity

MOm had taken Kostis under its wing after his rescue during Cyclone Zorbas. They took him to a first aid centre to help him recover from the shock. Then he was returned to his natural habitat in the Aegean Sea.

But the sociable monk seal was often seen close to shore, lying on boats in the port and posing for photos. He became a regular sight on the island and charmed his way into the hearts of locals.

Alonissos is part of the first park of its kind in Greece where sealife is protected by Greek law.

The Alonissos and Northern Sporades marine park is the largest such protected area in Europe, according to the marine park’s website.

Greece has allocated a large area of the park for the preservation of the Mediterranean monk seal because of its status as an endangered species.

What is the conservation status of the Mediterranean monk seal?

Mediterranean monk seals are an endangered species, with almost half of the remaining populations living in Greece.

The Mediterranean monk seal belongs to the Phocidae family, one of three main groups of mammals within the seal lineage. As of 2015, it was estimated that less than 700 of these seals survive in three or four isolated subpopulations in the Mediterranean, particularly the Aegean Sea, the archipelago of Madeira and the Cabo Blanco area in the northeastern Atlantic Ocean. They are believed to be the world’s rarest Pinniped (seal) species.