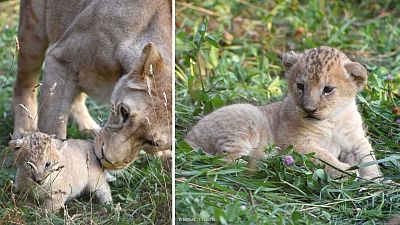 Nzuri, a lioness born at the Bioparc Zoo in France on July 1st, has just turned two months old.

She is the zoo's first female cub and was born into their conservation programme.

Nzuri, which means 'Magnificent' in Swahili, is the first child of Baz and Esma, a young pair of lions living in the park. She has been carefully discovering her two and a half hectare territory under the watchful eye of her mother.

So far the cub has divided her day between important activities such as naps and playing.

Bioparc is a 14-hectare zoo that opened in 1961 and it has been working closely with conservationists to help save endangered species ever since.

In the last 20 years, the Bioparc has extended its activity to South America, Africa and Asia. They have nature projects which safeguard the last herd of West African giraffes in the Niger and protect Madagascar's forests.

They are working closely with the Snow Leopard Trust in Mongolia to help save this endangered sppecies too. The zoo reported that two baby snow leopards were born in May as part of the European Breeding Program.

Bioparc is home to some 1000 animals representing about 100 species that live alongside Nzuri and her parents.

Watch the video above to see two-month-old Nzuri in her enclosure.