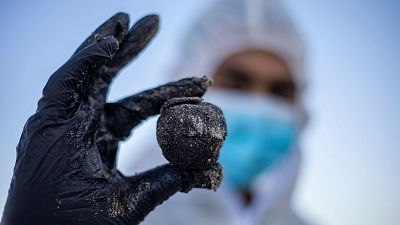 An Israeli soldier wearing a full protective suit holds a piece of tar from an oil spill in the Mediterranean Sea.   -   Copyright  Ariel Schalit/AP Photo
By Doloresz Katanich  with AP & AFP  •  Updated: 04/03/2021

Over 90 per cent of Israel's 195-kilometre Mediterranean coastline has been covered with more than 12,000 tonnes of tar causing extensive damage to the ecosystem.

Volunteers were quick to step in and have been working hand in hand with soldiers on loan from the army to organise the cleanup.

A local NGO believes that the government was not sufficiently prepared to react to an ecological disaster like this.

"The Ministry of Environment took a few days until they actually started to manage the issue. They are not prepared to deal with such emergencies, this is one of our problems with them."

Jacobs believes that there's no sufficient emergency preparedness and not enough manpower to deal with such an incident.

"They need a lot of help in order to be able to cope with such a thing. And so the NGOs and the municipalities are the ones who came into the vacuum," she says.

The pollution has also been swept north to neighbouring Lebanon and has severely impacted the local ecosystem. Seabirds, endangered green sea turtles and other marine life have been killed.

Zalul is now calling for the creation of a regional force to tackle such ecological emergencies.

"This is actually something that we've been calling to create, a regional emergency force that would serve all the countries around us, because the sea is polluted, in the sea or on the beach, either way we need to clean it up," adds Jacobs.

According to the Israeli Environmental Protection Ministry, the spill came from a Libyan-owned tanker transporting oil from Iran to Syria. Ministry officials said it is believed the ship dumped its oil in the eastern Mediterranean, around 70 kilometres off the coast of Israel, in early February. Israel said it received no prior warning before thousands of tons of tar started washing up onshore.

The oil spill's impact on the coastal ecosystem has yet to be fully assessed, but it is believed to be Israel's worst ecological disaster in years. Thousands of volunteers and clean-up crews have mobilised to remove tar from beaches, a task that is expected to take months.