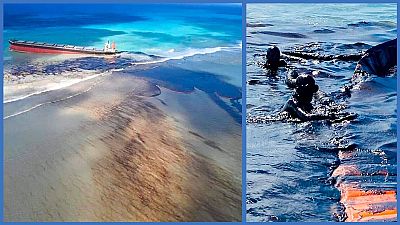 Residents in Mauritius have been using homemade devices to try to limit the damage from the spill.   -   Copyright  AP/AFP
By Marthe de Ferrer  •  Updated: 10/08/2020

Volunteers in Mauritius have spent the weekend trying to contain a major oil spill which is threatening the island nation.

The MV Wakashio, a Japanese bulk carrier ship, ran aground on a coral reef just off the Mauritian coast at the end of July. Last week the ship began to break apart, spilling oil into the pristine Indian Ocean.

The boat is believed to have been holding 4,000 tonnes of oil, nearly a quarter of which is estimated to have leaked into the surrounding waters. A state of emergency was declared by Prime Minister Pravind Jugnauth, who then asked French President Emmanuel Macron for assistance with the clean-up.

Over the weekend, thousands of students, activists and residents worked to try to limit the damage from the ship.

“We will never be able to recover from this damage. But what we can do is try to mitigate as much as we can,” says Sunil Dowarkasing, an environmental consultant and former MP.

People have quickly created oil booms (floating barriers used to contain spills) out of sugar cane leaves and straw, which they floated out to sea using plastic bottles. Hairdressers in the town of Mahebourg have been collecting hair trimmings from various salons, which are being stuffed into nylon stockings to create additional oil booms.

On the shore, volunteers have been using empty oil drums to collect fuel which has already floated into the shallower waters.

"The whole island was taken by a shock with this spillage,” explains Dowarkasing, “the civil society has taken over the state in this endeavour to try to mitigate the spillage.”

"People have realised that they need to take things into their hands. We are here to protect our fauna and flora," adds Ashok Subron, an environmental activist. Volunteers transported baby turtles and protected plants from the nearby Ile aux Aigrettes, as experts feared they could be killed by the spill.

Some of the fuel onboard the ship was able to be removed by helicopter, but today’s rough waves and heavy winds of up to 50km/h have exacerbated an already delicate clean-up situation.

Why does the spill pose such a threat to Mauritius?

This is the most devastating oil spill in Mauritian history. The atoll (a ring-shaped coral reef) is home to many endemic species, so this disaster could cause their extinction.

“Thousands of species around the pristine lagoons of Blue Bay, Pointe d’Esny and Mahebourg are at risk of drowning in a sea of pollution,” warns Happy Khambule from Greenpeace Africa.

The Mahebourg Lagoon is “one of the most environmentally important parts” of the country, according to Dowarkasing, who adds, “this is no longer a threat to our environment, it is a full-blown ecological disaster.”

The blue economy is vital in Mauritius, with around a quarter of the country’s GDP stemming from tourism and 10 per cent from ocean activities like fishing. The island nation has already suffered economic downturn amid the coronavirus pandemic, so this disaster looks set to further devastate the country’s finances.

“It is a full-blown ecological disaster.”

However, the catastrophe could act as a catalyst in the decline of fossil fuels, argues Khambule.

“There is no guaranteed safe way to extract, transport and store fossil fuel products,” he says, “this oil leak is not a twist of fate, but the choice of our twisted addiction to fossil fuels.

“Once again we see the risks in oil: aggravating the climate crisis, as well as devastating oceans and biodiversity and threatening local livelihoods around some of Africa’s most precious lagoons,” Khambule concludes.

Mauritius arrests captain of ship that spilled over 1,000 tons of oil