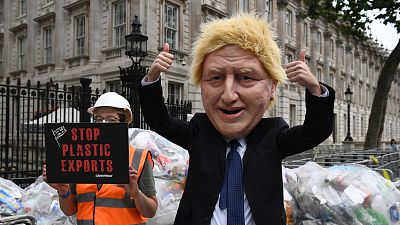 Chris J Ratcliffe / Greenpeace   -   Copyright  A figure of the Prime Minister with a costume headpiece was at the scene where a tipper truck reading ‘Stop plastic exports’ offloaded the plastic
By Shannon McDonagh  •  Updated: 13/07/2021

More than 600 kilograms of plastic waste has been dumped at the door of Downing Street as part of an “intervention” by climate campaigners Greenpeace.

The organisation alleges that what was left outside the home of British Prime Minister Boris Johnson is equal to the amount of plastic waste the UK exports to other countries every 30 seconds.

Onlookers witnessed a truck dump the materials alongside a figure dressed as a caricature of the Prime Minister, similar to that featured in the organisation’s ‘Wasteminster’ viral video released earlier this year.

The action was taken in retaliation to the Conservative Party’s unfulfilled manifesto promise to ban the exportation of all plastic waste.

Last year, the UK exported 688,000 tonnes of plastic packaging waste to other countries - an average of 1.8 million kilograms every day or 625 kilograms every 30 seconds.

Earlier this year a Greenpeace investigation found that mountains of British household plastics were being burned at landfills and roadsides across ten different locations in Turkey.

The country is the UK’s largest outlet for these troubling exports, according to the BBC.

Tensions surrounding the issue have heightened in light of a policy U-turn by the Turkish government that would have curbed the amount of plastic the UK can send there.

The proposed ban would have included exports of PET, HDPE and LDPE, the types of plastics used in beverage bottles, health and beauty products, plastic films and bags.

It is believed that a slew of lobbying efforts from the plastic industry contributed to this sudden change, just a week after it was meant to be implemented.

A Defra spokesperson admitted at the time of the policy announcement that the UK should “handle more of its waste at home.”

As the second biggest consumer of plastics in the world, Johnson is tasked with creating infrastructure that allows for all of its waste to be recycled nationally in order to reduce the frequency of damaging disposal methods.

What are the consequences of this?

The plastic industry makes an economic argument for exporting waste to less economically developed nations. The reality of the situation, however, is a lot darker.

“UK plastic sent to Turkey is being dumped and burned, with serious environmental and social consequences for local people."

She argues that the Turkish government's stalling should implore the UK government to "urgently ban all plastic waste exports and stop our plastic mess impacting other countries."

“We hope this pile of plastic helps the government to not only visualise the huge volume of plastic waste we export, but also to understand what it feels like to have waste dumped on your doorstep.”