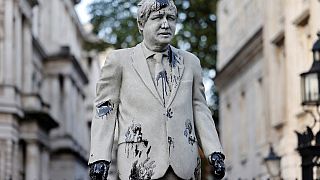 Greenpeace activists put up an oil-splattered statue of Boris Johnson outside Downing Street on Monday, urging the prime minister to block the proposed development of a huge new oilfield off the Scottish coast.

The UK government is expected to approve the development of the Cambo oilfield off the Shetland Islands, despite opposition from environmentalists.

Greenpeace warns that the oil extracted from Cambo in its first phase would "produce emissions equivalent of up to 18 coal plants running for a year" and would leave the UK "politically isolated".

Britain has committed to become carbon-neutral by 2050 and is hosting the COP26 climate change summit in Glasgow next month.

Protesters staged a sit-in in front of a banner saying "Boris: Stop Cambo" and put up a 12-foot (3.60 metre) mock-stone statue of Johnson with a plaque saying "Cambo oilfield: Johnson's monumental climate failure".

"Johnson must stop Cambo, and instead prioritise a just transition to renewable energy to protect consumers, workers and the climate from future shocks," Greenpeace campaigner Philip Evans said.

The government argues that the country needs to produce more domestically to protect its energy security.

It currently faces a serious crisis due to soaring wholesale gas prices, as the country is heavily dependent on gas and produces only around 48 percent of its supply.

Cambo oilfield contains over 800 million barrels of oil, 170 million of which are planned to be extracted in its first phase.

It is 70 percent owned by Aberdeen-based Siccar Point Energy -- backed by US private equity firm Blackstone -- and 30 percent by Shell UK.