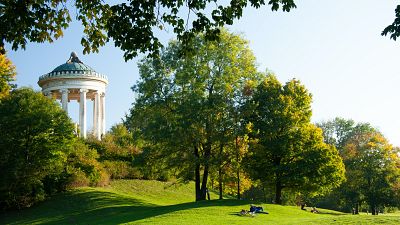 Europe is home to many iconic cities, each with its own distinct characteristics - and the parks are no different.

The striking visual aesthetics of our continent’s green spaces make them popular spots for both locals living in the city and tourists stopping by.

From Hyde Park in London, and the Jardim de Estrela in Lisbon, to the Villa Borghese in Rome and the Gorky Central Park of Culture and Leisure in Moscow, it is clear that our readers appreciate a good city park in Europe.

Here at Euronews Green, we’ve been thinking about how ‘green’ our cities really are, and whether more could be done to make these spaces more sustainable.

Why is nature important in an urban environment?

Parks are an important part of any neighbourhood and provide multiple benefits to the local community and, by extension, the wider society.

These green spaces provide an area for exercise, leisure and recreational activities to take place; allow locals to engage with wildlife and nature; provide a space for dog owners to take their pets out for exercise; and are instrumental in relieving stress and boosting our well-being.

In major cities, however, connecting with nature is even more important.

Increased urbanisation across Europe has meant that a larger proportion of the population is now living in urban cities. Forecasts predict that by 2050, 68 per cent of the global population will live in cities. In Europe, the level of urbanisation is expected to increase to 83.7 per cent by 2050.

The health effects of more people living in cities are already being noticed by researchers: it is estimated that nine million people die every year as a result of air pollution. This means that city planners and leaders have to prioritise the development of green spaces in big cities, in order to make cities more habitable.

As more people move into already crowded cities, green spaces are essential in making urban areas healthier places for people to live in. They are also a good way to make over-developed cities more environmentally friendly for the planet.

But what makes a green space eco-friendly?

The conservation and restoration of natural areas and wildlife is an important part of sustainability, especially within cities - where green spaces can often be replaced with new office buildings or residential apartment blocks.

Planting trees, bushes and plants can promote a healthy ecosystem within the park and the inclusion of wetlands or lakes can be a better form of flood control (as well as a home for more wildlife).

There are many ways in which green spaces in European cities are trying to become eco-friendly.

In a 2020 index, Paris was named as the greenest city in Europe, and for good reason: several measures have been proposed and implemented to develop more green spaces across the city, including the Promenade Planteé.

The Parc André-Citroën, which sits on the site of the old Citroën car manufacturing plant, is home to the park’s aerial sightseeing balloon, the Ballon Generali, an air quality awareness tool that monitors air quality and changes colour accordingly.

London’s Richmond Park is a great wildlife hotspot and is famous for its deer parks. These deer are protected by The Royal Parks who enforce strict measures for public interactions with the deer as part of their wildlife conservation scheme.

As a result, deer herds have been able to live comfortable lives in their natural habitat, relatively free from disruption.

In Madrid, El Retiro Park uses silent, solar-powered boats to navigate through the lake in a bid to reduce excess pollution in the park. The park also covers 125 hectares and has more than 15,000 trees on its land.

Amsterdam, another notably ‘green’ city, is dotted with green spaces, including the Vondelpark, which covers 47 hectares making it the largest park in the city.

Frankendael Park is an ecological hub that includes nature trails, a sustainable restaurant that was renovated from an old 1926 greenhouse and relaxing waterways.

What do our readers think?

However, while many people acknowledge city parks’ efforts to be as eco-friendly as possible, there are still some who are sceptical of just how ‘green’ these green spaces really are.

We asked our readers how eco-friendly they thought their city’s green spaces were and a few people did not consider their local city parks to be very ‘green’.

One follower explained how they believe that city parks are more concerned with the aesthetics of the surroundings rather than the ways that they can attract more wildlife to the area.

This raises a good point about these cities’ objectives when developing new green spaces: Are European cities only interested in creating visually appealing green spaces that can attract as many visitors as possible? Or do they genuinely want to create green spaces that can tackle some of the environmental issues that come with living in a metropolitan city?

While many city parks in Europe are visually stunning, with buildings designed to attract more people, these parks can fall short of being truly eco-friendly in their maintenance. This shows that the development of truly green spaces in European cities still needs some improvement.

With the COVID-19 pandemic forcing many of us to work from home over the past year, green spaces have become a much-needed respite from being at home all day every day.

It is clear that lockdown has changed many people’s attitudes towards green spaces with a few of our followers explaining how visiting parks have become a frequent fixture in their daily routines as a result of the pandemic.

Therefore, it is crucial that the quality of these green spaces is improved for both the public and the environment.

What do you think about your local green space? Is it a perfect oasis, or does it need some improvement? Let us know by joining in the conversation on Twitter using @euronewsgreen.