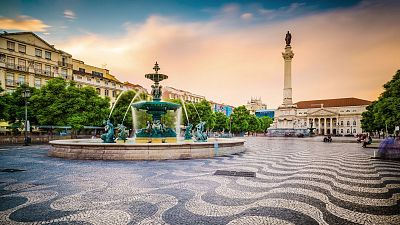 The Estufa Fria is a hidden delight in chaotic Lisbon. This botanical garden complex takes visitors around a world of plants. I pass by cacti and calathea, and even chickens and baby coots in search of an oddity.

Last year, Belgian artist Nicolas Lamas tried to install his sculpture ‘Illusion of Stability’ here. It was a musing on man's existential flimsiness, the fact that we can't control the world the way we think we can. It was to prove apt. The technology-filled work was destroyed by a storm before it could be unveiled. It was scrapped and these words took its place. A marker, crouching between some ferns, tells the story of this fascinating scenario.

The poignancy of the whole enterprise would not be lost on anyone who thinks about the planet as an integrated system and it certainly wasn't lost on Lisbon, which was last year's European Green Capital.

The Estufa Fria, a fascinating confection of plants, lakes and odd architecture, has been caring for the world and its plants for hundreds of years. But the honest truth is that the city outside its walls has not had the same things on its mind until very recently.

Outside lies the Eduardo VII Park - which is being nicely restored; it is the city's lungs.

It is named for the King in honour of the centuries-old alliance between Portugal and Britain - the world's longest. It's a marriage that has been tested in recent times with Britain repeatedly gaslighting its old friend. Most of the 'green' talk you hear in June 2021 in Lisbon is about the fact that Portugal keeps being the fall guy for Britain's Covid woes, as it is yet again demoted from the UK's ‘green safe travel list’.

But green has more meanings too.

Cars are a disaster and an addiction

Ironically, the biggest poster about the Green Capital status last year belongs to a mid-range French car company and flies next to a highway in Belem where traffic roars past. Cars are a disaster for Lisbon, and an addiction.

If it wants to clean up its act it desperately needs to restrict them further from flying down narrow allies, and prioritise pedestrians and cyclists, like it has done with traffic calming along the former waterside expressway running from Cais do Sodre to Praca do Comercio.

There are huge highways everywhere, it all feels very retro. But plans have been floated to make them less car-centric.

There aren't enough bikes but perhaps the hills are too much - they would certainly give you thighs of steel if you lived here. Lisbon has its historic trams of course, when many cities insanely ripped them up, Lisbon kept them and today they, and the funiculars that drag you up to Bica and Bairro Alto flourish.

Green projects, both big and small

Other initiatives to green the capital are going ahead at full steam though – bins you can empty used cooking oil into are a great idea. Instagram feeds like Green Lisbon point visitors to sustainable shopping and accommodation options.

An interactive journey into the artworks of Klimt and Money at the Palace of Water shows how important this precious resource is to the city. Built in the 1700s, the palace collected the fresh water brought on an incredible aqueduct into the city centre and exploring its cool architecture, as paintings by those two greats are projected onto the ancient walls, show how important it is to preserve and protect water.

The vast Tagus estuary is being cleaned – but it's a big job. And swimming currently looks pretty unappealing at most murky spots along its side. Even out at Cascais the water could be cleaner and they are working on this problem.

That's an ambitious project, but there are smaller ones too: Sem Terra Farms pioneer the low energy growing of highly nutritious micro salads, sold in boxes at health food shops across the city.

And on the outskirts of Sesimbra the Villa Epicurea eco lodge and yoga retreat offers a model for how tourism can progress in a country where it's a big industry.

Over a plate of stuffed mushrooms and zucchini, vegan chef Lotte, from Antwerp, tells me about her quest to educate people on the importance of food. The sun sets over the unchlorinated bio pool, looked over by just a handful of eco-friendly cabins and a dome, surrounded by lush greenery.

Pine scent hangs heavy in the air, and you can see the lights of Lisbon twinkle in the distance, perhaps ushering in a greener future for Portugal's capital.