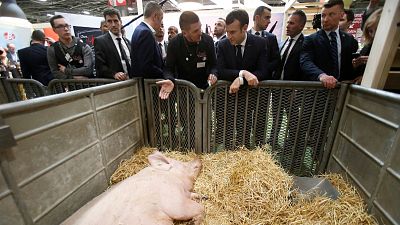 Environmentalists have criticised the European Union's reform of its controversial common agricultural policy (CAP), arguing that it fails European citizens, small farmers and the climate.

Greenpeace, the European Environmental Bureau (EEB), BirdLife, Friends of the Earth Europe and the World Wide Fund For Nature (WWF) lambasted the provisional agreement - agreed on Friday- and said it turns a blind on the climate and biodiversity crises.

"This CAP reform is, unfortunately, a big failure: a failure for citizens, for taxpayers, for the planet, for climate, and even for farmers, for those small farmers which are facing problems to get to the end of the month, those who are disappearing at the rate of 1,000 a day," Marco Contiero, policy director on agriculture at Greenpeace EU, told Euronews.

"It's a failure for the climate because there are no provisions in the reform that obliges member states to put in place new practises to decrease greenhouse gas emissions," he added, describing the agreement as "big, huge greenwashing".

This CAP reform is, unfortunately, a big failure: a failure for citizens, for taxpayers, for the planet, for climate, and even for farmers.

"Agriculture ministers, in reality, have been fighting for years to decrease and to delete any significant ambitions in terms of environment and climate that this CAP [reform] had."

Following three long and fractious years of negotiations, European institutions announced that they had reached a provisional agreement to reform the CAP that it claimed would make it "simpler, fairer and greener" while avoiding a disruptive transition towards sustainability.

The agreement is the result of talks between the European Parliament and representatives from the 27 EU countries under the auspices of the European Commission.

On the table was €270 billion, the total amount earmarked for the CAP under for the 2023-2027 period. The new multi-annual EU budget is supposed to run from 2021 to 2027, but as negotiations dragged on, the Commission was forced to extend the current CAP programme until the end of 2022. After that, the reformed CAP will enter into force.

What's in the new CAP?

Among the most important changes, the CAP introduces a new way of working: each member state will design a strategic plan outlining how it intends to spend the CAP funds taking into account national needs and characteristics. The Commission will review the plans before disbursing the money.

The deal promises the CAP will "fully integrate" EU environmental and climate legislation and contribute to the targets of the Farm to Fork and biodiversity strategies.

Countries will have to allocate a minimum of 25 per cent of direct payments to eco-schemes (environmentally friendly initiatives such as organic farming or precision farming), while at least 35 per cent of rural development funds must go to projects that promote environmental, climate and animal welfare practices.

For the first time, the EU introduces "social conditionality" in the CAP to ensure that those who benefit from the subsidies comply social and labour regulations within their businesses.

The reform also envisions a mandatory redistribution of payments: countries will redistribute at least 10 per cent to the benefit of smaller farms. According to EU Agriculture Commissioner Janusz Wojciechowski, CAP subsidies are heavily concentrated: 80 per cent of payments end up in the hands of 20 per cent of beneficiaries.

Additionally, 3 per cent of CAP funds will have to go to young farmers (those under the age of 40).

The European Parliament particularly celebrated the inclusion of a mechanism to penalise those who breach EU labour rules and "repeatedly fail to comply with EU requirements", like animal welfare. Farmers could lose up to 10 per cent of their allocated payments if they're found to be non-compliant.

The provisional agreement has yet to be approved by the European Parliament and adopted by agriculture ministers in the Council. The institutions are now working to specify the technical and legal requirements. Governments will have until the end of this year to submit their strategic plans.

Copa-Cogeca, the leading lobbying group of Europe's farming sector, voiced a more positive reaction to the provisional agreement, saying it "represents an unprecedented challenge for the EU's farming community".

"I think that today there is clear progress in terms of taking the environment into account. Of course, some people would have liked to go faster, higher and stronger, but that would have jeopardised the economy of farms. The agreement that has been reached is balanced between the economy and the environment," Christiane Lambert, president of Copa-Cogeca, told Euronews.

Farm Europe, a think tank focused on rural economies, said the deal was an improvement compared to the Commission's initial proposal that gives impetus to a "real economic and environmental ambition" but regretted that food chain issues, like digitalisation and nutrition, were missing from the text.

The path to CAP reform has been tortuous, unfolding both in public and private view.

Historically, the CAP has represented the biggest share of the EU budget. Agricultural policy used to consume more than 70 per cent of the bloc's finances during the 1980s. However, as European economies diversified and political priorities changed, the CAP's share fell below the 40 per cent threshold, still a significant proportion for a sector that contributes around 1.3 per cent to the EU's GDP.

The CAP provides farmers with direct payments to make their businesses more profitable, reduce risks associated with weather and guarantee food supply chains across the continent. The programme has firm supporters, such as France and Spain, who argue it is necessary to maintain local farmers afloat in the competition against developing countries that are able to export cheaper products.

But the CAP has also been the target of fierce criticism, with many pointing out that its current design favours polluting farming practices, wastes public money and is a breeding ground for corruption.

Given its oversized financial allocation, the CAP has undergone several reforms since its first introduction in 1962. The latest round began in 2018, when the European Commission, back then still under the command of Jean-Claude Juncker, put forward a proposal with a "more flexible, performance and results-based approach".

But as MEPs and national governments discussed internally their position for the coming negotiations, a hugely transformative development took place: Ursula von der Leyen replaced Juncker at the helm of the Commission and introduced the European Green Deal with the goal of revamping the bloc's economy and achieve climate neutrality by 2050.

All change is evolution, not revolution.

President von der Leyen vowed to review every piece of legislation and every EU programme in order to make them compatible with the Green Deal's ambitious goals.

The future of the CAP quickly rose to the top of the agenda: the agricultural sector is responsible for around 10 per cent of the EU's greenhouse gas emissions. The bulk of the emissions comes from the livestock sector due to its effects on soil carbon stocks: when forests and greenlands are turned into arable land, carbon is released into the atmosphere.

The pressure added by the EU Green Deal led to Commission Executive Vice-President Frans Timmermans to threaten to withdraw the 2018 reform proposal if the institutional compromise didn't align with the bloc's climate policy.

Once the Commission puts forward a legislative file, it is up to the European Parliament and the Council of the EU to reach an agreement through the so-called "trilogue" process.

Since the executive is expected to act as honest broker, Timmermans's threat was badly received by national governments. His boss, Ursula von der Leyen, had to intervene to quash the speculation and confirmed the proposal would remain on the table. Still, the Dutch commissioner continued to express his discontent over the ongoing negotiations.

Last week, however, Timmermans celebrated the news of the provisional agreement, calling it a "game-changer" and a "step in the right direction" that aligns the CAP with the Green Deal. But he also conceeding the text "could've gone a bit further".

"All change is evolution, not revolution," Timmermans said.

EU to press on with legal case against Hungary despite referendum