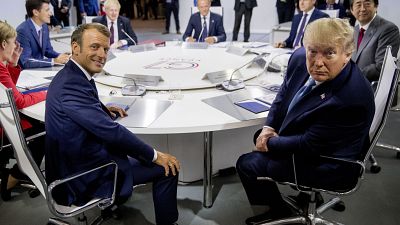 French President Emmanuel Macron, center left, and President Donald Trump, centre right, participate in a G-7 Working Session on the Global Economy.   -   Copyright  Andrew Harnik/Copyright 2019 The Associated Press. All rights reserved
The opinions expressed in this article are those of the author and do not represent in any way the editorial position of Euronews.
By Kevin Casas-Zamora  •  Updated: 29/06/2021

Dr. Kevin Casas-Zamora is the Secretary-General of the International Institute for Democracy and Electoral Assistance (IDEA), with over 25 years of experience in democratic governance as a researcher, analyst, educator, consultant and public official. Here he discusses the role that democracy plays in mitigating climate change.

When Germany’s highest court ruled that the country’s climate change policies were insufficient to protect future generations and a Dutch court ordered oil titan Shell to reduce its carbon emissions by 45 per cent, the decisions marked a sea change.

Our ‘embattled climate’, said one environmental lawyer, had finally won.

Climate litigation is the new frontier in the fight over climate change. By 2020, the number of legal cases doubled in three years, to more than 1,500 cases in 38 countries. These include Indigenous groups suing the Canadian and New Zealand governments and youth activists taking legal action against Peru over deforestation.

What unites nearly all of these cases? They are taking place in democracies.

The recent court rulings tell us a lot, not just about the powerful assets that democracy can deploy in the struggle against climate change, but also the long-term robustness of the case for democracy as a political system.

Democracies are under pressure from populism, disinformation, inequality and voter frustration, according to the Global State of Democracy report from the intergovernmental organisation International (IDEA). They are also afflicted by a crisis of self-confidence.

Fairly or not, the current pandemic has helped cement a narrative portraying liberal democracies as lumbering and too divided to cope with big challenges, while extolling the presumed ability of authoritarian systems to act decisively.

What are the vices to democracy?

This narrative is not concocted out of thin air. Democracies do suffer from vices when it comes to slow-burning crises like global warming.

Voters and politicians have short attention spans. Balances of power mean reforms can be held hostage to obstinate US Senators or oil lobbyists. Science can play second fiddle to voters if it entails higher taxes - France’s yellow vest protests, sparked by fuel price rises, are a case in point.

And yet, despite all this, the facts are clear - 9 out of the 10 top performers in the 2021 Climate Change Performance Index are democracies.

Sweden tops the list of 57 countries. China is 30th.

The reasons for this are not hard to fathom. Democracies allow for the free flow of information that enables policy makers to debate and find solutions, and for civil society to mobilise. It is no coincidence that youth campaigner Greta Thunberg helped spark a global movement from a lone street demonstration in Sweden, one of the world’s top performing democracies.

It is no coincidence that youth campaigner Greta Thunberg helped spark a global movement from a lone street demonstration in Sweden, one of the world’s top performing democracies.

Democracies are more effective against climate change for the same reasons that they don’t experience famines, as Nobel Laureate Indian economist Amartya Sen suggested long ago - because in allowing freedom of expression, a vibrant civil society, regular elections and the workings of checks and balances, they increase the likelihood that crises will be met and destructive policies corrected.

Democracy is not simply elections - it is the often chaotic workings of myriad institutions and groups as well as a culture of open debate, where climate reform is nudged along by courts, free media, parliaments, and public protests. Democracy’s most powerful weapon against the challenges of this century is its ability to self-correct.

And then there is the capacity of democratic systems to forge the social consensus required for long-term transformations to be sustainable. We know this story - participatory decision-making may be slower than executive decrees, but almost always yields outcomes that are more legitimate and accepted by society, and hence more durable.

This is vital for climate change. Decarbonisation is not something governments do by fiat, though act they must - it is something societies as a whole must do by conviction. Consumer habits will need to change, from reducing air travel to adjusting diets. Trillions of dollars will have to be invested in transforming the sources of energy that fuel economies.

New social contracts will have to be devised so that the burden of these fiscal bills can be equitably shared. There is no guarantee that democracies will succeed in building the consensus needed to save our species, but their odds are better than those of any other political arrangement.

This is, however, the key question – while it is clear that the attributes of democracy are potentially superior to deal with climate change, it is much less clear that they will be actually deployed with the celerity required. This is, precisely, what courts are doing in Germany and elsewhere - they are moving forward the deadlines that political systems and societies must meet if our species is to avoid disaster. Those deadlines are tight – a few decades, at most.

But courts alone won’t do the trick. Democratic governments, parliaments, and political leaders must also dramatically increase the pace of their actions.

This is why it is so vital to connect the discussion of climate change with debates on the quality of democratic governance. We must distill, disseminate, and design the institutions and practices that are more likely to allow democracies to build consensus, distribute burdens and make decisions effectively to meet the climate crisis. Experimenting with new forms of political deliberation, like citizens’ assemblies, enlarging the representation of young people by lowering the voting age and adopting some of the bargaining practices between industries, workers and governments that have been so instrumental in building consensus in Northern Europe - this is the stuff democratic governance agendas should be made of in the climate crisis era.

Citizens’ assemblies, lowering the voting age...this is the stuff democratic governance agendas should be made of in the climate crisis era.

If democracies do not rapidly deploy their considerable assets in this struggle, the pressure to deal with the problem in authoritarian ways will prove irresistible. Our planet will lose out - and so will our human condition.