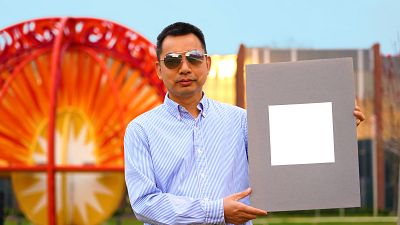 Engineers in the US have created the “whitest paint yet” and it could help cool down buildings, meaning less reliance on air conditioning.

The paint reflects 98 per cent of sunlight and radiates infrared heat through the atmosphere into space. The team at Purdue University who developed it says it is the “closest equivalent” to Vantablack, a paint that absorbs 99.9 per cent of visible light.

Its creation is a result of scientific attempts that go back to the 1970s. The Purdue lab has been working on creating the paint for six years to provide an alternative to air conditioning.

The use of fans and air conditioners to keep our homes cool accounted for around 10 per cent of global electricity use by 2018. According to a report from the International Energy Agency, it could be set to rise to nearly 40 per cent by 2050.

“If you were to use this paint to cover a roof area of about 1,000 square feet (930m2), we estimate that you could get a cooling power of 10 kilowatts,” says Xiulin Ruan, a professor of mechanical engineering at Purdue University.

“That’s more powerful than the central air conditioners used by most houses.”

Its impact on the environment isn’t just in reducing energy use from air conditioning. The whitest of white paint is able to reflect infrared radiation away from the planet into space. As part of their study, the team calculated that if 0.5 to 1 per cent of the Earth’s surface was covered in it, it would reverse the total effects of global warming to date.

What makes the paint so white?

The cooling effect of the paint comes from a high concentration of the chemical compound called barium sulfate. It is also used to give cosmetics and photo paper their colour.

In the lab at Purdue, they considered over 100 different materials including calcium carbonate, a substance commonly found in rocks and seashells. After narrowing down the options, barium sulfate was the most effective for cooling.

“We looked at various commercial products, basically anything that’s white,” says Xiangyu Li, a postdoctoral researcher who worked on the project. “We found that using barium sulfate, you can theoretically make things really, really reflective, which means that they’re really, really white.”

Particles of the compound in the paint are different sizes which the researchers say gives it the ability to scatter a wide range of wavelengths.

The researchers say that the next step is to make the paint commercially available and they are already working with a company that could produce it.