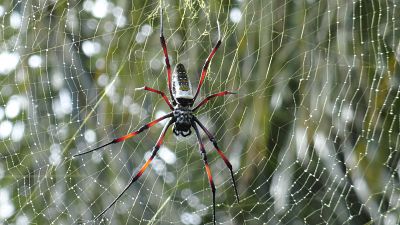 We already know that spiders are genius builders, but new research suggests that they could also be masterful musicians.

Scientists at the Massachusetts Institute of Technology (MIT) are now able to detect music created from the silk of their delicate webs.

Each strand’s thickness and length corresponds with a frequency, like any other stringed instrument. With the aid of a haunting synth pad, the sounds have been described as “harp-like”.

Lead researcher Dr Markus Buehler has been interested in the relationship between music and science for a long time. He set out to investigate the extraction of rhythms and melodies from natural materials.

"Webs could be a new source for musical inspiration that is very different from the usual human experience,” says Buehler.

How did they do it?

Despite having the use of eight eyes, spiders are practically blind by human standards. They see the world through touch and sound down to the tiniest detail.

Buehler and his team worked with Argentinian contemporary artist Tomás Saraceno in order to "hear" their webs.

A natural spider web was scanned with a laser to capture 2D cross-sections, which were recreated in 3D using computer programming. The team assigned different frequencies of sound to strands of the web, creating ‘notes’ within the web’s structure.

The team were able to link different sections of the web with different frequencies, playing the spider web music in live exhibitions around the world.

For further insight into the web-building process, they created multiple scans of its construction, converting the sounds to relay a soundtrack of the stunning creation.

Scientists have long maintained that the silk produced by spider webs is five times stronger than steel. It has been suggested that a Boeing 747 could be stopped in flight by a single strand.

MIT’s work with virtual reality played an important role in the experiment’s comprehension of how we understand their structures. Scientists were able to visually and audibly "enter" the web via computer to make more sense of how spiders build and inhabit their homes.

"The virtual reality environment is really intriguing because your ears are going to pick up structural features that you might see but not immediately recognise," Buehler says. "By hearing it and seeing it at the same time, you can really start to understand the environment the spider lives in”.

The future of spider sounds

These findings echo work assembled by Oxford University back in 2014, where they found that a spider’s innate sense of pitch allows it to engage in the sophisticated tuning of its web.

“The spider can actually pluck or bounce the silk strings, and it can monitor the echoes that come back so it can locate objects,” revealed lecturer Beth Mortimer at the time.

Exciting communication implications have arisen from both studies - it might be possible for spiders to create their own note sequences to contact with other spiders. It could even give humans a pathway into understanding the highly intelligent arachnids better by speaking in their own language.

"If we expose them to certain patterns of rhythms or vibrations, can we affect what they do, and can we begin to communicate with them? Those are really exciting ideas”.