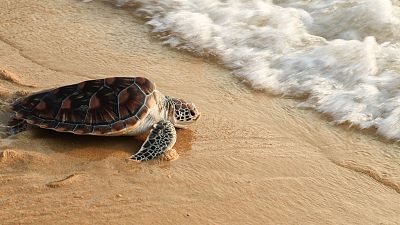 Sea turtles are swimming for joy after being released back into the ocean.

The 14 turtles were set free after months of rehabilitation at a zoo in Texas, US.

In December, 120 Kemp’s Ridley Sea Turtles, the smallest, rarest and most endangered species of sea turtle in the world, were found in Cape Cod, Massachusetts.

This feel-good ending to a major rescue mission comes just weeks after 4,000 turtles were rescued in Texas, from the beach town of South Padre Island.

Residents volunteered to warm the animals after the state experienced unprecedented cold weather, which pummeled Texas with snow and ice and brought record low temperatures.

Also known as Atlantic ridley sea turtles, the animals had been “cold-stunned” -- a hypothermic reaction caused by prolonged exposure to cold water.

When the water dips below 10ºC, turtles become weak and risk drowning from being unable to lift their heads to breathe.

Veterinary staff at the Houston Zoo nursed them back to health and released them into the Gulf of Mexico at Stewart Beach, Galveston.

Six other turtles were released at Grapevine, Texas on the same day.

“It really is a shared ocean, and we were so grateful to be able to support the sea turtle community in New England when they needed help with the large cold-stunning event,”

Three turtles remain in special care as they continue recovering from fungal pneumonia, the zoo said.