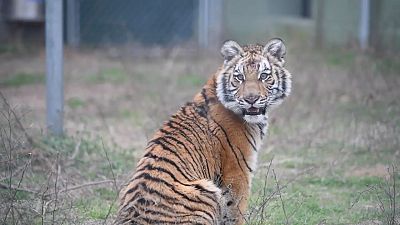 Six-month old tigress Elsa has arrived to her new home in the Black Beauty Ranch in Murchison, Texas, US.   -   Copyright  The Humane Society of the United States via Storyful
By Doloresz Katanich  •  Updated: 25/02/2021

An anonymous call was made to police in San Antonio, Texas during the recent winter storm, informing them a tiger may need rescuing.

When they arrived, the Bexar County Sheriff’s Office found a six-month-old tigress. Wearing a harness and underfed, it was clear she was being kept as a pet, which is illegal in the county.

Her rescuers decided to name her Elsa, after the main character in the animated film 'Frozen'.

While it is legal in parts of Texas to privately own a big cat as a pet, such ownership is prohibited in San Antonio. Elsa’s former owners face a fine, probation or a prison sentence of up to a year. Elsa, meanwhile, was take on on a five-hour road trip across the state to her new home.

Moved to a better life

She was taken to San Antonio’s Southern Wildlife Rehab and a few days later she was successfully transported to her new home the Cleveland Amory Black Beauty Ranch in Murchison, Texas. The sanctuary stretches out over more than 560 hectares in northeast Texas. The owners have been taking care of animals for 40 years and they currently have 800 animals, including 40 different species, under their care. Other former pets include primates and reptiles.

She will be housed alone for the first month while her health is monitored. Later she will join Loki, another tiger brought to the Ranch after being discovered in an abandoned house in Houston, trapped in a cage where he could barely move.

"These tigers, that have been bred for the exotic pet trade, have unfortunately been raised around people. So they would not be successfully able to be released in the wild," says Noelle Almrud, senior director of Black Beauty Ranch.

Why not keep a tiger at home?

Extreme confinement in small and barren cages, improper diets, inadequate shelter, lack of veterinary care, monotony and boredom, and not being able to behave as they would in the wild, are just some of the conditions wild animals kept as pets typically face, according to The Humane Society of the United States.

Hundreds of people - including children - have been seriously injured or killed as a result of being kept as pets.

There is currently a bid to regulate the ownership of wild cats in the United States. The bill, called 'The Big Cat Public Safety Act', has been passed by the House of Representatives and now it is up to the Senate to pass it. The bill would prohibit the private possession of lions, tigers, leopards, cheetahs, jaguars, cougars, or any hybrid of these species.