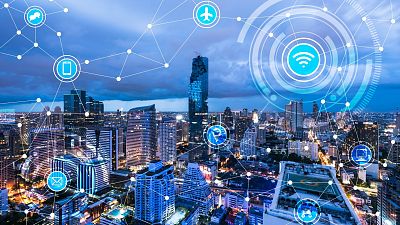 The Internet of Things (IoT) is collaborating with a a Dutch startup to help solve some of the “biggest issues facing the world today”.

Founded in 2016 and led by a team of satellite experts and tech entrepreneurs, the company’s mission is to bring IoT solutions to some of the world’s hardest-to-reach places, using €26 million in funding.

The cash injection from EU and private investment will enable Hiber BV to expand its satellite network and grow its customer base to areas where there has never been an affordable phone or WiFi connection.

What is the Internet of Things?

The term IoT encompasses everything connected to the internet. It is increasingly being used, however, to define objects that "talk" to each other – from simple sensors to smartphones and wearables.

By combining these connected devices with automated systems, it is possible to “gather information, analyse it and create an action to help someone with a particular task or learn from a process,” Matthew Evans, the IoT programme head at techUK, says.

Within industrial applications, sensors on product lines can increase efficiency and cut down on waste.

"IoT offers us an opportunity to be more efficient in how we do things, saving us time, money and often emissions in the process," Evans told Wired.

"The Internet of Things (IoT) is changing everything," says Hiber. "The way we live, work and play are witnessing the kind of transformation perhaps only rivalled by the industrial revolution."

Scaling up its satellite network and IoT solutions will have a significant positive impact on some of the biggest issues facing the world today. The company says this encompasses “eliminating food wastage [and] reducing the environmental impact of extracting fossil fuels”.

“Every year, 30 per cent of food production is lost or wasted and 33 per cent of oil wells experience leakages,” explains Coen Janssen, Chief Strategy Officer and co-founder of Hiber.

“Both problems can be addressed by using technology to monitor pressure, humidity or temperature,” he added. “These are great examples of how space innovation can solve important global problems and improve lives”.

How does Hiber BV keep costs down

Thanks to the use of tiny nanosatellites orbiting 600km above Earth, the technology is low cost and low power with internet modem batteries lasting 5-10 years.

Hiber has just launched its fourth satellite, the Hiber Three, which was put into orbit by a Soyuz rocket. The company announced via Twitter that the launch took place on 22 March.

For the European Innovation Council Fund (EIC Fund), the EU’s innovation agency, being able to award Hiber a share of its €278 million Innovation Fund enables the EU to play a bigger role in the global space sector and enhance its autonomy.