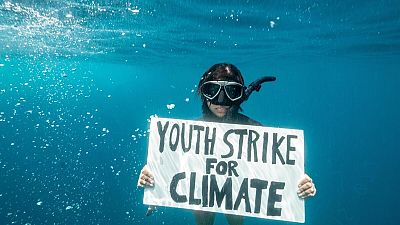 The world’s first underwater climate strike has taken place in the heart of the Indian Ocean.

Scientist and climate advocate, Shaama Sandooyea, floated in the water at Saya de Malha Bank, a site 735km off the coast of the Seychelles home to vast seagrass meadows.

She held placards reading “Youth strike for Climate” and “Nou Reklam Lazistis Klimatik”, Mauritian creole for “We Demand Climate Justice”. The marine scientist joins youth and climate activists around the world as part of Fridays for Future’s March 19 climate strike.

“I’ve taken a stand here in this beautiful, remote area of the Indian Ocean to deliver a simple message - we need climate action and we need it now.”

The area in which she carried out her protest is close to home for the Mauritian scientist. She says she felt compelled to become an activist from a young age after seeing how vulnerable this stretch of ocean was to climate change and witnessing incidents like the recent oil spill in the area.

“Being from an island nation I know first-hand just how important healthy oceans are, not just to our climate but to the billions of people in the Global South who depend on them,” Sandooyea says.

She launched her protest from an expedition being carried out by a Greenpeace ship called Arctic Sunrise. The vessel is surveying Saya de Malha Bank, a little researched marine region between Mauritius and Seychelles.

It is home to species such as rabbitfish and endangered green sea turtles which rely on the seagrass. This marine plant is also vital to conservation as it absorbs large amounts of carbon dioxide. Occupying just 0.2 per cent of the seafloor, seagrasses represent a tenth of the ocean’s capacity to store carbon.

It is home to species such as rabbitfish and endangered green sea turtles which rely on the seagrass.

Due to bottom trawling and other human factors, these vital marine habitats are being lost at an alarming rate. Around 92 per cent of the UK’s seagrass has been lost and meadows around the world are shrinking.

The campaigners are aiming to draw attention to the UN’s goal of ensuring countries work together to protect at least 30 per cent of the planet’s land and oceans by 2030.