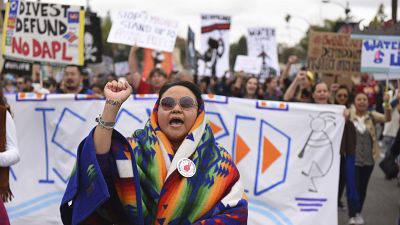 Large infrastructure projects can be controversial and often don’t take into account the effects on local people and the environment.

These major projects have all either been paused temporarily, scrapped before they were even started, or stopped from continuing thanks to the work of climate campaigners all over the world.

Considerable opposition was mounted against moving Brazil’s F1 circuit from Sao Paulo to Rio when plans emerged earlier this year. The proposed track would have meant felling thousands of trees in Cambouta Forest, the last forested area on Rio.

After petitions and the #BrazilSaysNoToDeforestation circulated on Twitter, the plans were shelved.

When the Standing Rock Sioux Tribe protested the Dakota Access Pipeline in 2016 it became a focal point for Indigenous rights around the globe. The 1931 km pipeline from Alberta, Canada to Texas would transport 470,000 barrels of crude oil a day but protestors said it would contaminate drinking water from the Missouri River and damage sacred burial sites.

The pipeline was completed in 2017 but use was suspended by a US judge in 2020 who sided with protestors and ordered a review.

After reports a nearby coal mine had caused land damage and water shortages, roughly 2000 protestors united to protest the excavation of a deep mine in the north western region of Bangladesh. There was already controversy when protests turned violent in 2006 resulting in the deaths of three protestors.

Although the project has been suspended since then local organising groups are keeping up the pressure.

Earthlife Africa, Johannesburg, went to South Africa’s High Court in 2016 to challenge the construction of a coal-fire power station in the province of Limpopo. South Africa is the biggest emitter of CO2 on the African continent and almost all its electricity comes from burning coal. Protestors were concerned that the power station was adding to this and diminishing water sources in the already dry area.

Last year the environmental approval was suspended by the High Court and the project was abandoned by investors.

In October 2020, 87 activists managed to get onto the tarmac at Roissy-Charles-De-Gaulle airport and stop a plane from taking off as part of a nationwide ‘day of action’ against expanding air traffic. The protestors wanted to stop the expansion of terminal four which would have increased the capacity of the airport by 40 million passengers a year.

In the end the French government intervened to suspend developments for environmental reasons.

The Vietnamese government stopped this project after an IUCN report stated it would pose a major threat to Cat Tien National Park. The area is a Unesco biosphere reserve and home to many threatened species including the lesser one-horned rhinoceros and siamese crocodile.

The dam would have caused water shortages for locals and the permanent loss of up to 372 hectares of forest.

There was outcry amongst some Lisbon residents at the suggestion for a new airport in Montijo on the Southern Bank of the Tagus River, and an impact study in 2019 highlighted danger to local wildlife.

The Gothenburg Gas Terminal would have been the largest of several fossil fuel stations on the Swedish Coast, that is until a day of mass civil disobedience in September 2019 saw hundreds descend and block the harbour there.

A month later the Swedish government denied a final permit for its construction on environmental grounds, a triumph for local grassroots activists.

The UK court of appeal ruled that the third runway at Heathrow Airport was illegal after years of opposition by politicians, locals and environmental groups. The ruling was made as the development would not comply with the UK’s commitments to tackle the climate crisis as set out in the Paris Climate Agreement.

It is the first ruling in the world on such a basis and has far-reaching, global implications.

These are the five biggest myths about sustainable living