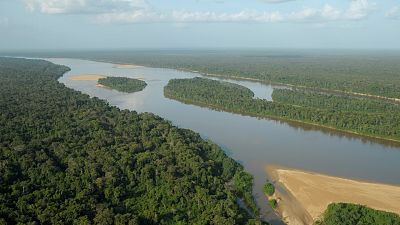 The Amazon rainforest could actually be contributing to the climate crisis, according to a new study published this week.

Scientists have always considered the vast rainforest to be a carbon sink, sequestering carbon dioxide from the atmosphere and helping to cool down the planet. But a first-of-its-kind study published in the Frontiers in Forests and Global Change journal suggests that other contributing factors have thus far been ignored.

The research highlights emissions other than carbon dioxide, like methane from floods and cattle, black carbon produced from forest fires and the albedo effect. Roughly 3.5 per cent of all methane released globally comes naturally from trees in the Amazon. Atmospheric warming from all of these sources now appears to overpower the natural cooling effect of the forest.

This suggests that the Amazon could be emitting more greenhouse gases than it absorbs.

Up until now, climate research in the basin has overwhelmingly focused on the cycling and storage of carbon and its implications for the global climate, the study says. Missing, however, is a more comprehensive consideration of other significant biophysical climate feedbacks.

“Cutting the forest is interfering with its carbon uptake; that’s a problem,” lead author Kristofer Covey, a professor of environmental studies at New York’s Skidmore College, told National Geographic. “But when you start to look at these other factors alongside CO2, it gets really hard to see how the net effect isn’t that the Amazon as a whole is really warming global climate.”

What can be done to help?

Clearing forests seems to be doing the most damage. But this can still be reversed, adds Covey.

One area that is of particular concern is the Brazilian Amazon (which makes up three fifths overall), where deforestation rates have increased by 60 per cent since 2012. In 2019, the first year of the Bolsonaro presidential administration, 9,762 km2 was deforested, a 30 per cent increase over the previous year.

Why is the Amazon rainforest so important?

Not only is the rainforest home to a wealth of different species and Indigenous people with hundreds of years of local knowledge of their medicinal properties, the plants of the Amazon have great potential as a source for future medical advances. It is one of the world’s most biodiverse regions with thousands of species still unrecorded.

The Amazon contains nearly a third of all the tropical rainforests left on Earth. Despite covering only about 1 per cent of the planet’s surface, the Amazon is home to 10 per cent of all the wildlife species we know about – and probably a lot that we don’t know about yet, according to WWF.

People around the world, as well as locally, depend on the huge rainforest. Not just for food, water, wood and medicines, but to help stabilise the climate. It plays a critical role in global and regional carbon and water cycles. We cannot tackle the climate crisis without protecting the Amazon due to its vital life-sustaining role.