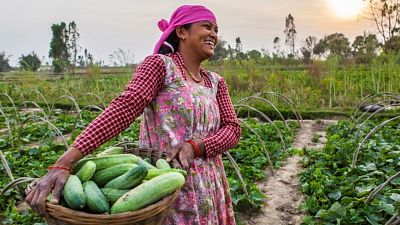 Globally, 690 million people regularly face the prospect of going to bed with an empty stomach - and that figure is on the rise. The United Nations Development Programme estimates that more than 1 billion people will live in extreme poverty by 2030.

On top of this growing problem, one of the many consequences of the COVID-19 pandemic has been that hunger rates around the world have surged. Millions have been pushed into famine-like conditions as programmes to deliver food have had to be suspended.

But according to Dr Lawrence Haddad, executive director of the Global Alliance for Improved Nutrition (GAIN) and 23 other World Food Prize Laureates, the pandemic also provides an opportunity to think and act differently. Together they have written an open letter calling on the US Government to take the lead on transforming the way we produce food and putting an end to world hunger.

"The opportunity for renewed US leadership to transform food systems has never been greater," the laureates write.

"The appetite of partners around the world to work with the United States in both the public and private sectors is strong. We urge the Biden-Harris administration to seize this moment and invest in development and cooperation to achieve zero hunger by 2030."

Ahead of the UN Food Systems Summit in September, the group has set out three steps for the US to help with achieving this goal. On the list is a recommendation to look at the benefits of improving our food systems for the health of both people and the planet.

What does world hunger have to do with climate change?

Research has shown that our changing climate has the potential to make the problem of global hunger worse. An additional 77 million people around the world could be exposed to hunger risks by 2050, according to the International Food Policy Research Institute.

Extreme weather events are becoming more common as our climate changes - and that’s bad news for agriculture. Swarms of locusts recently decimated crops in Kenya, Ethiopia and Somalia threatening the livelihoods of millions and leaving serious agricultural damage in their wake. Experts have linked these devastating events to warmer than average temperatures.

There's evidence now that high levels of CO2 in the atmosphere actually depress the nutrient content of key crops.

And, Dr Haddad says, it isn’t just about making sure that there is enough food to go around. Higher temperatures have also been linked to a decrease in the diversity of foods eaten by children. Climate change is altering the nutritional quality of food available, not just the quantity.

“There's evidence now that high levels of CO2 in the atmosphere actually depress the nutrient content of key crops,” he explains.

“Because even though some people may not be hungry, in the sense that their bellies are full, if they're not getting the right nutrients, then their immune system is really weak.”

Why call on the US to solve world hunger?

Alongside the 23 other co-signatories, Dr Haddad believes that now is an incredibly fluid time for governments. He says that if countries don’t respond to the crisis with austerity, the end of world hunger could be in sight.

“For an extra $33 billion (€28bn) a year, we can get hunger numbers down to below 200 million by 2030,” he says. “It’s not a small number but it’s not large compared to some of the numbers we’ve been seeing in COVID relief packages.”

This isn’t exactly solving world hunger, and that may seem like an implausible goal but, as Dr Haddad says, “the last 12 months have shown us that the unthinkable can become thinkable.”

"Ending hunger is a choice, we have to make that choice. And that choice will also be good for climate change and a whole range of other outcomes too."

The world, and particularly the US as the Biden administration begins to enact its vision for the future of the country, is at a critical juncture. Although countries around the globe were unlikely to fail in their Paris Agreement goals solely due to the absence of the US, the international pact is almost certainly stronger with the country in it.

That leadership on environmental issues could be essential in ensuring food security is one of the integral issues considered in international talks.

“This focus on climate, by the Biden administration, is going to really help with hunger, but it needs to be much more focused,” Dr Haddad says.

“I think the reason we called on this new incoming administration, is that they have priorities around climate, jobs, COVID, and diversity. All of those four priorities that Biden has highlighted, they're all important for the work that GAIN and others do around diets.”

We need to stop thinking of climate as a separate issue

Transforming food systems could come with other benefits too. Around 30 per cent of global CO2 emissions come from agriculture and high-income populations tend to consume a lot of greenhouse gas producing meat.

At the same time, there are many people around the world not consuming enough animal products to get essential minerals and vitamins, Dr Haddad says. Changing the way food is produced opens up the opportunity to make systems more efficient while solving problems with hunger and nutrition at the same time.

There is a lot of potential, it seems, to solve our food’s climate and security problems if we stop thinking about things in rigid boxes. Governments organised in the 1950s and 60s have the tendency to place issues into categories like agriculture, health and environment without necessarily considering what might link them together.

There are huge amounts of synergies that we're not exploiting.

Dr Haddad says that young environmental campaigners are helping policymakers and experts like him to think differently: “there are huge amounts of synergies that we're not exploiting, actually. And I think young people are less captured by those, those silos.”

The most productive thing that could change at international talks and summits in the near future, he believes, is not necessarily policy but a shift in the way that experts and world leaders approach problems like food security and climate change.

Cigarettes are killing the planet - should we ban them?

What are the most eco-friendly chocolate eggs to buy this Easter?

Wildfire risk increases in the UK due to climate change, says study