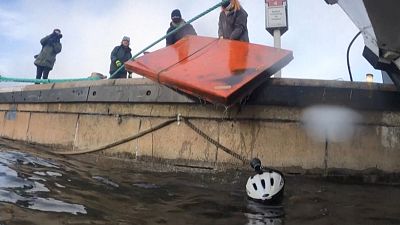 More than 100 volunteers are cleaning up Stockholm by pulling harmful waste out of the city's lakes and waterways.

When diver and social care worker, Frederik Johansson's friend bought a boat in 2018, he dived under to check the hull. He was shocked to discover how much waste discarded by boat owners littered the Swedish capital's waterways.

He decided to do something about it and set up a group of volunteers called Rena Mälaren, meaning "clean lake Mälaren" in Swedish. Their aim is to remove toxins from the lake and the Baltic Sea while encouraging people not to treat these fragile ecosystems as a rubbish dump.

"When I go down into the water just here in the middle of Stockholm, there is so much trash, it's just unbelievable," says Johansson.

"It's a lot of scooters, it's lead batteries, it's big metal things, it's safety boxes, it's tires, it's just about everything."

He explains that there is so much waste because in the past these waterways were seen as a place to easily dispose of toxic items. In the 1960s people in Stockholm were encouraged to sink debris into the sea, as long as it didn't float, and the group rarely finds batteries with a current expiration date.

In the two years since the movement was founded, Rena Mälaren has pulled tonnes of trash out of Stockholm's waters.

"Sometimes it is depressing to see all of the trash, of course it is," says Johansson.

"There is so much talk about everything that is going bad and it is, but I really think that we can make a change."

Click on the video above to hear from Johansson and see the divers in action.