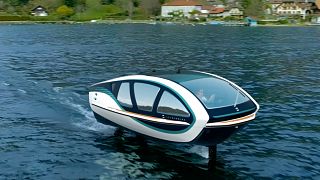 The recreational boating sector is being urged to embrace sustainability at sea and traditional gasoline- and diesel-powered boats are under the spotlight for their impact on the planet.

The industry appears to be responding by looking to sustainable energy sources for both propulsion and on-board systems in order to cut the carbon emissions of boats and yachts.

Solutions include electric propellers and turbines, solar plates, environmentally-friendly batteries and waterjet propulsion, alongside the use of recyclable shipbuilding materials and filters to reduce noxious substance output.

In the shift toward sustainability, Francis Lapp, Founder and President of Sunreef Yachts in Dubai, thinks the marine industry is lagging behind the automotive sector.

“I think it's going very slow in the boating industry. All the governments in Europe and around the world are working on the cars, but not on the boats,” he told Euronews.

Industry pundits say this delay is in part due to the lower production rates of yachts and the increased complexity of yacht manufacturing compared to that of cars.

The high cost of installing electric propulsion systems in boats and their limited battery capacity have impeded large-scale electric motor growth in the market.

Though small, demand for electric motors has steadily been increasing. The long-term cost-benefit of electric motors over conventional engines is making their installation more economically viable and installing them is getting easier.

Among the major G7 countries, the UK was the first to target net-zero greenhouse gas emissions by 2050, which includes the adoption of electric boats and ships. According to a recent Future Markets Insight Report, Europe – led by Germany – is expected to hold the largest share in the market owing to the highest demand for new electric boats.

The benefits of greener boats

With zero emissions, solar-powered hybrid boats are emerging as an attractive alternative to conventional boats, with the added advantage of noise reduction. In addition to clean, vibration-free power, digital ecosystems can monitor key values such as volts and temperature to extend the lifecycle of propulsion systems.

Previously, propulsion systems in electric boats were powered by lead-acid batteries; the disadvantages of lead-acid batteries include added bulk and low battery cycle time. The latest trend is for lithium-ion batteries, which use phosphate technology. They have up to 10 times longer battery life than lead-acid batteries, plus they’re quick to charge, lightweight, low in toxicity levels and more easily disposed of in line with environmental best practices. As a result, more boat manufacturers are looking to these batteries in their designs.

The trend for slow travel – longer, more mindful trips to fewer destinations – is another way to embrace a green sailing ethos. Luxuriating in the journey while travelling at a calmer pace reduces fuel usage.

The hospitality and tourism sectors are adapting to accommodate the trend for both slow and eco-friendly travel at sea.

In Italy, on the famous Lake Como, one tour operator is offering e-tours on classic retrofitted electric boats, which sail around Como’s most ogled villas, including Villa Fontanelle (the former Villa Versace) and Villa Oleandra (George and Amal Clooney’s holiday home).

On Norway’s scenic Telemark Canal, an all-electric fleet of Greenline Yachts is available for hire. The boats have a range of 50 nautical miles on a full battery charge, with a network of 10 fast-charging stations onshore. Recharging takes a maximum of three hours.

Whether for hire or purchase, as electric boat availability increases, consumers are more able to take a stand by choosing sustainable models – though some in the industry are clear that time is running out.

“Fossil fuels are finite – we are going to run out of them. We either do it now or we won’t be around to enjoy the planet anyway,” says Luis Marinho Falcão, Head of Communication and Sustainable Growth at Faro Boats. “There’s no choice.”