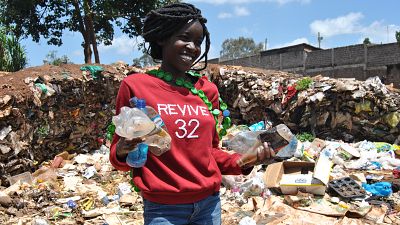 Kibera's Mev Adongo holds up plastic bottles she has picked from the trash near the railway line.   -   Copyright  Dominic Kirui
By Dominic Kirui  •  Updated: 24/11/2020

As the mid-morning sun beats through the corrugated iron sheets and mud-wall shanties that make up Africa’s largest urban slum, raw sewage flows from the doorsteps of the makeshift houses. This is Kenya's Kibera slum.

In the heart of it all, Nairobi local Gisore Nyabuti sits quietly in his bottle-walled office as he listens to a group of young boys talk and laugh on the street outside. He speaks of the destruction caused to his neighbourhood by a recent upgrade of the railway line that has cut straight through the area.

“We had cleaned, planted food crops and fruit trees, and the area along the railway line was green again and really good. But the recent countrywide railway line restoration across the country had to mess it up and there was nothing we could do about it,” the 23-year old professional mechanic explains.

As they revamped the railway line, workers unearthed plastic waste and demolished the grass around the slum. They knocked down houses and destroyed plants and vegetation, causing havoc to people’s livelihoods. One house in particular had been built by Nyabuti and his friends out of bottles and waste. They had planned on planting mushrooms inside it.

The big clean up

Nyabuti is mobilising the youth in his neighbourhood, especially those with a criminal past, to embark on a mass cleanup. He says he is happy that more and more of them are joining and taking responsibility for the damage caused to the environment.

To make it all happen, he founded a community-based organisation (CBO) dubbed Slums Going Green and Clean. The movement is now gathering momentum - he has managed to recruit 33 members and works with a total of more than 300 others to clean up the Kibera slum.

The young people he works with are not motivated by anything but a passion for a cleaner environment, says Nyabuti, adding that he finds this heartening.

They wear bottle-made hats to raise awareness while they work.

“My younger brother got a job at a hospital within Nairobi as a nurse and is the one helping us get lunch for the youth while cleaning. We haven’t received any support from anyone else,” he says.

The young mechanic has ambitions to expand his project to other slums, not only in Kenya but in the whole of Africa.

“Every urban centre in Africa has a slum. And so our dream is to reach out to them and empower the youth to clean it up.”

Recently, Nyabuti and his team took part in a protest in Nairobi against an allegation based on a leaked letter by the American Chemistry Council. The council wanted Kenya to lift its ban on plastics so that manufacturing industries can be set up and supply plastic products to other African countries.

In 2017, Kenya passed a stringent law against plastic pollution that prohibited the manufacture, importation, and use of plastic bags in the country. But three years later, the country is still struggling with single-use plastic, seeing clogged waterways and plastic landfills piling up in dumpsites. The problem is even worse in the slums, owing to their poor disposal systems and densely populated areas.

Nairobi’s Kibera slum is just one example. Here, plastic bottles are a particular threat and residents have to live with it every single day.

“If you look at the trash that is dumped here, it is not largely from here in the slums but from high–end estates within the city. Just like the US wants to dump its own waste here in Kenya, it will end up here with us in Kibera,” says Mev Adongo, a member of the CBO.

Greenhouse gas emissions from the plastic lifecycle threaten the global community's ability to keep the planet's temperature rise below 1.5°C. This is according to a 2019 study by the Centre for International Environment Law.

By 2050, the greenhouse gas emissions resulting from plastic could reach over 56 gigatons, which is between 10-13 per cent of the entire remaining carbon budget. In 2019, the production and incineration of plastic was projected to produce more than 850 million metric tons of greenhouse gases - that’s equal to the emissions from 189 five-hundred megawatt coal power plants.

An online campaign to ban plastic in Kenya was started by James Wakibia in 2015. He used the hashtag #banplasticske to raise awareness of the issue.

Wakibia was driven by anger after he saw plastics lying everywhere in Nakuru, about 150 kilometres away from Nairobi. He then embarked on a campaign to compel the government to ban the harmful material, a decision that was made in 2017 by the then Minister for Environment, Judy Wakhungu.

The activist applauds the youth movement to clean up the slums, saying that this is largely for their own benefit. “I would like to see more youths engaged in matters of environmental conservation than anybody else. Ultimately it will be for their benefit, it is their future and not the future of their parents. The parents have done most parts of their lives,” says Wakibia.

But the news that the American Chemistry Council is seeking to bring back plastics is a thorn in Wakibia’s flesh, after all the hard work he’s put in. “That is something that is quite perturbing because we have come a long way; in the last three years the environment has really changed and everybody can see the gains we have made. Therefore it will be a big drawback as we shall be reversing all those gains we have made.”

It is terrible that the US dumps its plastic waste in African countries like Kenya, as it is a first world country, says Nyabuti. Surely by now, it should have come up with another solution?

“Kenya does not have a proper waste management plan in place already, and so it is not justified to bring more here,” he concludes.

Improving the slums in Kibera is just the start, for Nyabuti. His youth clean-up group is determined to continue, inspired by Wakibia and spurred on by hope that the movement will spread far and wide across Africa.