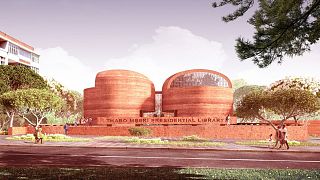 A new library in South Africa is leading the way in sustainable building design.

The Thabo Mbeki Presidential Library is being built using mud from the local area, parts of the woodwork will be from native wood species, and flooring throughout the building will be made from local stone.

The 5,400 m² building was designed by Ghanaian-British architect, Sir David Adjaye OBE. He recently won the 27th Annual Crystal Award for his leadership in serving communities, cities and the environment.

Electricity for the building will come from solar panels on the roof and a geothermal heating system is also planned. It will work in tandem with the thermal mass of the rammed earth walls to regulate the building's temperature.

"The Thabo Mbeki Centre presents an opportunity to realise the ambition of the dreams of President Thabo Mbeki to advance and empower an African renaissance," says David Adjaye.

"The architecture of the library taps into the collective memory of the continent through the establishment of a new historical centre for African consciousness in which knowledge, education and sustenance are nurtured in the representation and intelligence of the continent."

The eight domed structure of the library resembles traditional African granaries. When the architect was looking for a shape that was ubiquitous to the continent, he found that the grain stores represent agricultural communities throughout Africa.

Alongside a research centre and museum, the building will contain seminar rooms, a reading room, an auditorium and temporary exhibition spaces. The date of opening is yet to be announced.