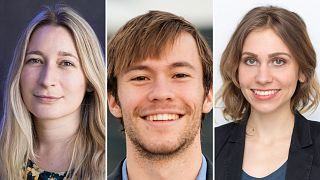 Millennials now make up 20 per cent of the population in Europe.

Often called the ‘Green Generation’, those born between the 80s and the late 90s are happy to splurge on more sustainable purchases and are more likely to believe humans have an important role to play in tackling climate change.

But what about our politicians? In a pre-COVID world, the climate crisis was one of the most discussed topics in Europe, with most countries across the continent claiming to take it seriously. The EU recently launched the ‘European Green Deal’, aiming to transform Europe into the first carbon-neutral continent by 2050 - so on the surface it seems as if the future is bright.

But what happens when the millennials are the leaders themselves? We spoke to three young, professional Europeans pushing for green solutions.

The climate was one of her key concerns when running for election. As an economics student, she wanted to combine the financial with the environmental, describing it as her gateway into green issues.

“The environmental aspects and the economic framework are just so important. So you have to understand that to fix the rest.”

For Peter-Hansen, this meant ensuring that the climate was discussed at the core of all political activity. “My perspective was that we have to secure green aspects in the mainstream, whether we do economic politics or employment policies or social policies, in order to get an environmental transition in general.”

I’m not just the young, idealist and activist shouting in parliament.

But she doesn’t work alone. Together with her political peers, she always finds ways to push for eco solutions in parliament. She says that she has found the MEP group welcoming and enjoys working together with other politicians.

“I have that backing always, which is really nice, because then I’m not just the young, idealist and activist shouting in parliament.”

Despite her hard work, Peter-Hansen doesn’t believe Europe is doing enough to guarantee a sustainable future, describing the political bodies as not “committed”.

The clock is ticking and radical changes do not happen overnight.

Her young age is both a positive and a negative, she admits. The 21-year-old says she finds it easier to discuss environmental issues with other young people than with older MEPs as there is a better generational understanding, an engagement she describes as “crucial”.

She also mentions having more energy as a strength. But at the same time, being a young woman in politics means facing prejudice and knowing when to push the limits and when to back down.

Being a young woman in politics means facing prejudice and knowing when to push the limits and when to back down.

Inevitably the conversation shifts to the topic of Coronavirus. Peter-Hansen describes it as a challenging time on a personal and political level. “I think a lot of green activists are struggling with how they should go about their activism.”

It means it’s even harder to keep the climate on the political agenda, she explains.

“Of course we all want to take responsibility and have this focus on Coronavirus and the pandemic and saving people’s lives. But it can be really difficult to push for other topics. I think it’s important that we don’t lose the hope, and that we also see this as a possibility to push for a green recovery.”

Working with environmental issues was not always what Ronja Berthold dreamed of. It was during her European-focused university studies that she became more political and this included switching to a plant-based diet.

This was a move that ultimately led to her job as Head of Public Affairs for the European Vegetarian Union.

Despite studying the EU as a political establishment, Berthold discovered that the process of pushing towards green change became a lot more complex when entering the world of work. “You definitely learn that having contacts and having a network is especially important to, you know, to really learn how everything works in practise.”

Berthold does not view her age as a problem, but the plant-based topic can sometimes be challenging as people view her and her colleagues as a highly niche lobby group.

“I think a lot of people don’t really have an idea of how many Europeans there actually are who are vegetarian or vegans.”

I think a lot of people don’t really have an idea of how many Europeans there actually are who are vegetarian or vegans.

Her daily routine involves monitoring the news and meeting with stakeholders, a job that has become slightly more difficult since COVID-19, with most meetings now one-to-one over a computer screen.

As a lobbyist herself, Berthold is sympathetic towards the politicians who have to cater to so many interest groups. At the same time she describes herself as doubtful whether green solutions will be successful in Europe.

The implementation of the European Green Deal has finally started but the process is slow. For Berthold this is a vital moment in time.

“We have to look very closely and see what is actually coming out of this in the end, when it comes to actual legislative initiatives.”

Romain Laugier is more upbeat when discussing the prospects of European sustainability.

“I’m tending to realise and re-discover everyday that we are never too small to make a difference. I think it’s a feature we all share among the young people.”

Working as a Climate and Energy officer for the EU branch of the World Wildlife Foundation (WWF), Laugier also found that the whole world stopped when Covid struck. “We were supposed to step up globally for the climate commitments and then this crisis arrived and no one was talking about climate change anymore,” he says, describing it as a daunting task.

Because, “how do we change one crisis for another?”

We were supposed to step up globally for the climate commitments and then this crisis arrived.

A few months on Laugier feels like the climate is back on the agenda, with discussions on how the world should move forwards in the run-up to the COP26 conference.

He says the different ways people can have an impact on European policy was surprising when he started working in the EU. “Working on climate policies and getting to meet policymakers and going to the European Parliament, European Commission. All these things work so far away and when you start working on that, you realise all these people are more accessible than you thought.”

With doom and gloom having had a strong foothold in society over the past year, Laugier reiterates his positive outlook towards a greener future.

“The climate crisis appears not as something insurmountable that is going to fall on you, but more something that you know about and manage, and you work on it.”