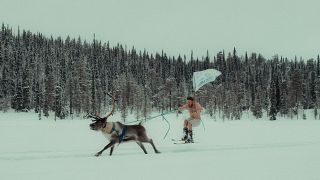 The tongue in cheek video for the campaign shows people doing summer sport in the snow.   -   Copyright  Save Salla
By Rosie Frost  •  Updated: 28/01/2021

Salla in Finnish Lapland has launched a bid to host the 2032 Summer Olympic games.

It isn’t the first place you might expect to host the summer games - temperatures regularly drop to -50 degrees celsius and it’s dubbed Finland’s coldest town.

But those behind the idea say this is not a celebratory occasion. The town is making the “crazy bid” to spread a serious message about the effects of climate change. The Save Salla campaign has been launched with support from Fridays for Future, the youth-led environmental movement set up by Greta Thunberg.

“Salla is changing. The whole planet is changing. Not in a good way,” reads its website. A tongue in cheek video shows residents sunbathing in shorts and eating ice cream in icy surroundings.

“Thanks to global warming, this snow will be sand,” say two people playing volleyball in the cold, white landscape.

The greening of the Arctic

Mayor Erkki Parkkinen said at a press conference that 2032 will be a turning point not just for the town but for the entire planet. Summers are getting hotter and winters are getting shorter in Salla.

“The climate is changing very rapidly and particularly the arctic areas are under drastic warming which is actually faster than the global average,” says Tuukkaa Petäjtä, a professor at the Institute for Atmospheric and Earth System Research (INAR).

If we stand back and do nothing, letting global warming prevail, the town we love will cease to exist as we know it.

He explains that results from atmospheric monitoring in Salla show that it has some of the cleanest air in the world, yet the effects of climate change are still showing. Birds are arriving and birch trees are putting out leaves earlier every year as part of “the greening of the Arctic”.

Without quantifiable solutions to reduce the impact of human activity on the planet, Salla and places like it are under threat.

“Our intention here is clear, we want to keep Salla as it is and our winters cold and full of snow,” said Parkkinen.

“So, there was this crazy idea to host the Summer Games in one of the coldest towns on the planet. If we stand back and do nothing, letting global warming prevail, we will lose our identity, and the town we love - as well as many others around the world - will cease to exist as we know it.

The Mayor adds that if Salla turns out to be the best place to host the 2032 games, then it will mean that we have failed to keep global warming below recommended limits.