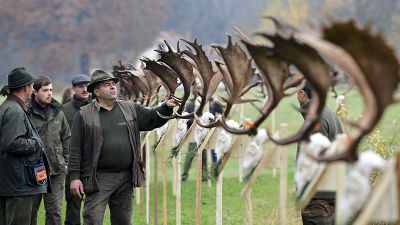 Celebrities and public figures have long been calling for an end to trophy hunting, a practice which involves hunters targeting animals with impressive traits such as the largest tusks or darkest manes.

In doing so, they can cause immense suffering to the animals.

But pressure groups like Born Free and the Campaign to Ban Trophy Hunting, who demand a US and UK-wide ban, have now been criticised for being misinformed.

Stand with me to #BanTrophyHunting now. Support The Campaign to Ban Trophy Hunting & get your T-Shirt at https://t.co/nZb0DiG33B ? pic.twitter.com/gCOM8fgc32

The new scientific report highlights “simplistic and inaccurate coverage of trophy hunting in mainstream newspapers” and points a finger at the media for selling emotive stories about saving animals, without providing all the information.

“The dominant media narrative is beguilingly simple: well-loved animals are on the brink of extinction, people pay to kill them, this is horrible, and stopping it will save species,” says the report in Conservation Biology journal.

“This narrative provides a perfect media concoction: peril (implied extinction risk), emotion (repugnance at killing for fun), a villain, a victim, and an action (donate and petition). [...] However, the reality is not so simple.”

The scientists go on to argue that trophy hunting also has the power to help populations increase, persist and recover. It creates economic incentives to maintain habitats and can protect against more substantial threats such as habitat loss and indiscriminate killing.

One newspaper allegedly claimed that trophy hunting was speeding up the rate of polar bear extinction for example, when the reality is that the species is far more threatened by climate change. “Only a small fraction of the sustainable hunting quota goes to trophy hunters,” says the report, emphasising the way some media outlets manipulate information to appeal to readers.

Locals in countries where the practice is common oppose a ban too. In July of 2020, 50 African community leaders signed a letter criticising celebrities, including Ricky Gervais, Joanna Lumley and Ed Sheeran, for pushing the ban. In the letter, they stated that their livelihoods depended on it and said the campaign “undermine[d]” their rights and conservation success.

Both US-based Born Free and Campaign to Ban Trophy Hunting in the UK maintain trophy hunting does not support conservation.