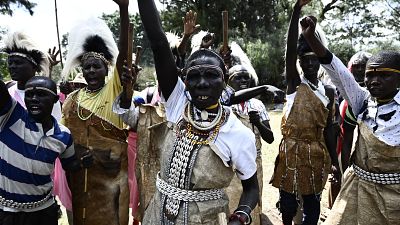 In 1954, the Embobut forest in Eastern Kenya was registered as a protected public forest. This land is the ancestral home of the Sengwer tribe of hunter-gatherers. The right of the Indigenous Sengwer community to dwell in the forest is recognised in the Kenyan Constitution which states that “ancestral lands and lands traditionally occupied by hunter-gatherer communities” are community lands.

However, since 2009 the Sengwer tribe has been systematically targeted and violently evicted from Embobut forest by the Kenyan Forest Service guards (KFS) as part of the government’s conservation efforts. Conserving the ecosystem is important – but surely not at the cost of an entire community and their livelihoods?

The Kenyan government, alongside the European Union (EU) embarked on a €31 million Water Tower Protection and Climate Change Mitigation and Adaptation Project (WaTER) in June 2016, expected to run for six years. The main aims of this project were to stimulate the productivity of the ecosystems around Embobut forest and Mount Elgon. The Embobut Forest is one of the most important areas of high forest land in Kenya as it supplies water to the surrounding region. But in the December, the KFS announced that the Sengwer tribe would be evicted by the end of the year in order to begin the project. It mirrored the failings of the World Bank’s Natural Resources Management Project (NRMP) as they did not receive prior informed consent from the Sengwer community.

As an Indigenous group, the Sengwer are a minority tribe in Kenya and have suffered several injustices due to their claim on the Embobut land and the tensions that creates with national and international conservation efforts.

“We really are nobodies to them!” says Winnie Kadoshy, a Human Rights Defender and member of Sengwer community, expressing how neglected the community feel by the government.

Since 2013, their houses and belongings have been burnt and destroyed. Although the Sengwer return to rebuild their houses and live on the land, they often use materials such as bamboo to make temporary shelters which is highly flammable. For periods of time, this can mean they end up homeless, exposing themselves to the elements which leads to illnesses such as pneumonia. In March 2017, a man of the Sengwer community was shot dead by the KFS and to this day, his widow and family are yet to be acknowledged or compensated by the Kenyan government.

Conservation efforts continue to be cited as the reason for the evictions of the Sengwer. Whilst the Embobut Forest is of national importance, the international conservation sentiments contribute to this tension too. Embobut has been the site of both World Bank and EU development and conservation projects. So it’s somewhat surprising that there has been a lack of adherence to international human rights law through more stringent policies and project performance indicators. The Sengwer community has not been consulted about these projects nor have they been given prior notice or compensation for being evicted.

The Indigenous way of life is inherently sustainable

Evicting the Sengwer community for conservation purposes seems particularly unjust because their way of life is geared towards protecting the environment in the first place.

There is growing literature that argues the significance of Indigenous people’s land rights in achieving environmental aims. In fact, many have claimed that their existence is especially important in conservation efforts. The Sengwer, as hunter-gatherers, live sustainably in Embobut Forest, maintaining their traditional way of life. Unlike farmers, the Sengwer do not harvest food for profit, but rather gather herbs for sustenance and for healing illnesses. In particular, their beekeeping efforts have revitalised the biodiversity in the forest.

“Our women compose songs and dance under beehives, whilst someone climbs up the tree towards the bees. He collects he honey and none of the bees sting him or the women.” Kadoshy highlights the harmony between the native flora and fauna and the Sengwer and explains how popular this natural honey is in Kenya, as well as the physical benefits.

“If you don’t know your rights, how do you fight for it?” she says.

The Sengwer community continue to fight for their right to dwell in their ancestral land. They also recognise the importance of representation on a national level through positions in government and even official recognition of Sengwer as a tribe in Kenya. In October 2019, the Sengwer tribe walked 450km to Nairobi to present their petition to the government. However, government officials declined to have a dialogue with them or to give feedback.

Conservation is the Sengwer way of life. These evictions to favour national and international conservation projects reduce the cultural diversity that the Sengwer created in the forest. On the 7th July 2020, EU officials met with several members of the Sengwer to discuss potential compensation and consultation on this project. However, Kadoshy believes the way forward is through a pilot programme which would allow the Sengwer tribe to undertake the conservation efforts whilst being monitored by the Kenyan government.

By placing both responsibility and trust in the community, the government would be respecting their rights to ancestral land and protecting the environment in doing so.