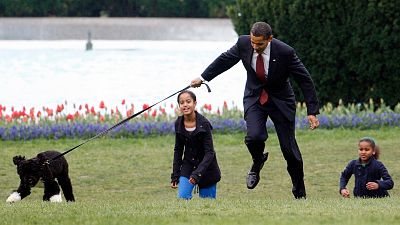 President-elect Joe Biden won’t be the only one honoured with a welcome ceremony into office this year.

For the first time in US history, a virtual “indoguration” will also take place, rolling out the red carpet for Biden’s two German Shepherds, Champ and Major.

Throughout the president-elect’s campaign, Major has received a lot of attention. Biden and his family adopted him from a shelter, making him the first ever rescue dog in the White House.

Pets in the White House are not unusual. In fact, Donald Trump is only the second American president not to have brought an animal onto the premises.

Joe and Jill Biden are very proud of their pups.

As previous heads of state know only too well, pets can have huge benefits on our health.

Research shows that being around dogs can reduce stress and decrease blood pressure (which may come in handy when you’re running the country).

Owning a pet also makes trips to the doctor less likely and another study found the risk of a heart attack decreased by over 10 per cent.

Dog owners in particular are more physically active than others and more likely to feel positive about their neighbourhoods, which researchers suggest may be due to exploring the area when out for walks. (Does a stroll around the White House rose garden count?)

Here’s a look back at some of the animals that have been lucky enough to call the White House a home over the last 40 years.

During his election campaign in 2008, Obama promised his girls a dog - no matter the election result. He kept his promise as the family welcomed Bo, a Portugese Water dog, in April 2009.

The family also adopted Sunny, a female of the same breed as Bo, during Obama’s second term. Although Sunny is occasionally referred to as Bo’s little sister, the two dogs are not from the same kennel.

Also a dog-loving family, the Bush family had three.

Spot was an English Springer Spaniel and was actually born in the White House, as she was the daughter of George Bush Senior’s dog, making her the only pet to have lived in the famous manor twice!

Two Scottish Terriers became very popular during their tenure in the White House.

Barney was a gift from George W Bush to his wife and gained so much attention from the American public that the White House created a website about him. During the president’s second term they welcomed Miss Beazley into the family, Barney’s niece.

An American shorthair black cat, India was named after a baseball player and became part of the family when the Bush daughters were still teenagers. India lived for nearly two decades.

Perhaps an example of how cats and dogs simply can’t be friends.

Socks, a cat, and Buddy, a chocolate-coloured Labrador, had to be kept separately as they did not get on whatsoever.

Their animosity towards each other was so bad that when the Clinton presidency ended, Socks was given a new home with Clinton’s former secretary.

Two of her puppies also lived in the White House: Ranger, who the family kept, and Spot, who would move in with Bush Junior later on. There is a park in Texas named after Spot.

Initially not having had any pets, the Reagans welcomed Lucky into their family in 1985.

A Bouvier des Flandres, Lucky grew so big that he was eventually sent to the family ranch to have more space to run around. The following Christmas, Ronald Reagan gave his wife Nancy a Cavalier King Charles Spaniel named Rex as a gift.

Rex was treated very well and given a very grand kennel of his own.

And lastly, there was the famous 'First fish'.

Sadly, there is no photo of the little guy anymore, but he is thought to have been loved by the president. Reagan was gifted the goldfish by a young boy, after being wounded in an attempted assassination in March 1981.

The president took the passing of his animals very seriously. As a result, the goldfish was given his own small funeral.